We enjoyed spotting the traditional misplacement of canal locks in the episode of Endeavour we watched last night.  Following the habitual use (set by several episodes of Lewis) of the Southern Grand Union to show a supposed spot in Oxford, we see Endeavour and Thursday at a murder scene here: 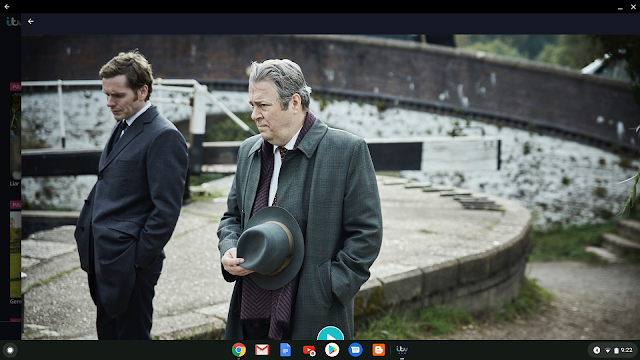 According to the script, it was by "Port Meadow bridge" although what a double gated Grand Union Lock was doing on the Thames, I'll leave you to imagine.

Anyhow, people familiar with the GU would have no problem in identifying Stockers Lock (Rickmansworth, home of Rainman) as the real spot.  Stockers is often used by film crews.  The adjacent farm must make money from it. Their main claim to fame is as the location for filming Black Beauty - although that's a long time ago now. Once when we were moored there some film guys came along the towpath offering people 50 quid to take their boats away for a week so they could shoot some horror film scenes.  Sadly we told them we were moving on before we learned about the money. Doh.  I suppose CRT gets some money from it.

Stockers is not that far from some film studios so I suppose that's the reason they use it, although in the same episode they shot scenes in Venice, the real one.  Why didn't they use Birmingham after all that has more . .  . .you know the rest.

I always enjoy films with canal locations, but of course, they're harder for me to spot in England. Endeavour is great! I watch it on the rare occasions it comes to our screens here.