Reservoir watching and general messing about

Blimey, I just Googled 'canal reservoir watch' and this is what came up; 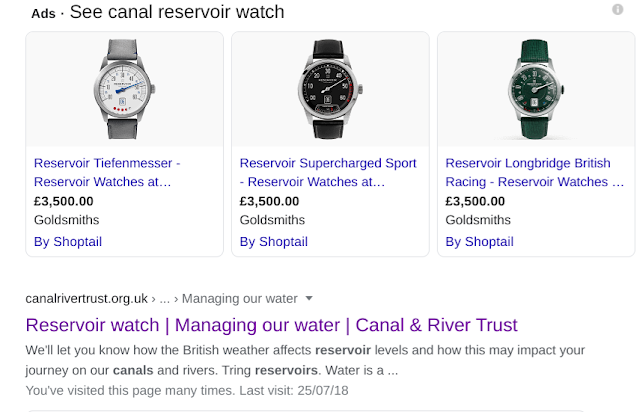 I don't know about you, but if I couldn't bring myself to spend three and a half grand on a watch, in fact I get a bit annoyed that anybody does.  Surely there are better things to spend it on.

Anyhow, I digress.  Just below was the CRT page I was looking for and I'm happy to tell you that despite my garden at home looking pretty brown and shrivelled until the last few days, the July reservoir figures look pretty healthy for this time of year.  Most of them were above 80% and have not dropped much since the previous month.  Wait a minute though, when did we get the all clear to go boating again?  Hmm, the canals are very busy right now, so maybe next month's figures wont look so good. Although on third thoughts, we've had a lot of rain just recently (and in fact as I write), so maybe they may be so good.  Oh I don't know, let's wait and see shall we?

We've had another family request for a short cruising break so on Saturday, if we're spared, were taking Claire and Grace out for a couple of days.  Grace must be bonkers because she's asked to go up and down the Napton flight again.  I reckon the lockdown  and no school has addled her brain.  I blame that education secretary who looks suspiciously like Alan Partridge.

In a bid to keep get fit, I've been out cycling most days.  Sadly I seem to have been left out of the Tour de France pick yet again so I'm having to content myself with the Tour de South Bracknell - six miles amongst a maze of cycle paths where I frequently seem to get lost.  You don't realise how hilly your area might be until you get on a bike.  Admittedly we don't have huge hills but the town profile is very rolling so it's a constant up and down.  Anyway I'm pleased to report that it is helping to bring my blood pressure down, if not my weight.

In other news, I have made my second focaccia bread, this time not from a bread mix but from the basic ingredients and  I bunged in some olives and rosemary and it was about right I thought.

Ooh one other thing, I have found the optimum price to charge for my two block buster novels.  Last week I got rid of 132 copies which is brilliant.  The downside is that the optimum price I set was £0,00.  I wonder if anyone who downloads free books ever reads them.    I worked out that at the rate Amazon pays me if they sold for £1 a copy, I'd have to sell 1090 copies a week to earn the National Minimum Wage for a 35 hour week.

Next time I write, we'll probably be up to our neck in buffaloes.  Those familiar with Napton locks will know what I mean.

We could not see any buffalo when we went up Napton last week. We'd promised them to our grand daughter who was staying with us . . .

we saw them yesterday Mike, but way across the field