We narrowly missed an opportunity to shoot Lucky Duck on new years eve (with a camera of course). After taking Peter back to his flat in Cambridge we took a very short stroll along the Cam which was very swollen with snow melt. 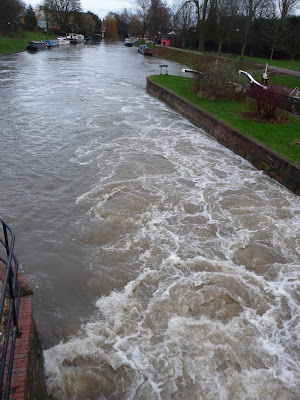 The air was absolutely freezing and although we know the Ducks like to moor by Fort St George we thought they wouldn't be so daft as to venture out in these conditions, so turned back a mere hundred yards before we reached there. Now we know from their blog they were there after all. Oh well. We did manage to get a photo of their pal's boat Nb Kestrel looking very shiny and smart. 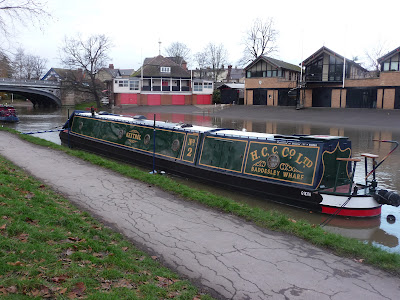 I'm sure Herbie's mooring won't be swollen with flood, but I bet it's iced over. We're hoping for a short trip out in the next week or so to go to London and back before the canal stoppage at Yiewsley starts on 19 Jan, but we'll be going nowhere if we're iced in. Manwhile I'm pondering on a design for a folding cratch table. More on that when I've visited Herbie to measure up.
Posted by Neil Corbett at 5:16 pm

Cor, I hadn't noticed that stoppage - I get so focused on the lock maintenance that I forget about the bridges.

You're definitely welcome on the Indigo Dream if you want a cruise into London being as we've moored on the right side of the works (entirely by chance!).

I hope you get your trip Neil. The weather over here means no one's going anywhere fast.

sorry we missed you! Let us know next time you are up our way- we can go for a drink in the Fort!