On Milton Keynes and a very dodgy manoeuvre.

On this trip we've passed a few times throught Milton Keynes. First by bus, which was a bewildering experience. We thought the driver was trying to lose someone tailing us, the route was so contorted. Dozens of roundabouts and dual cariageways that all look the same. And then the city centre boulevards lined by smart buildings, looking just like those city of the future cartoons drawn in the 1950s. All we needed was the monorails.
By canal you can't get lost. You just follow your nose through a long long linear park. Most of the time it looks like this. 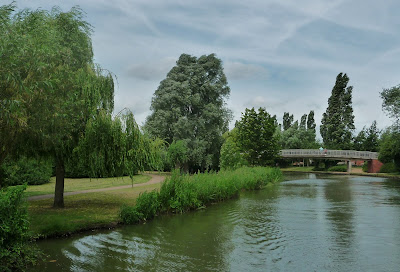 with occasional glimpses of routes into town 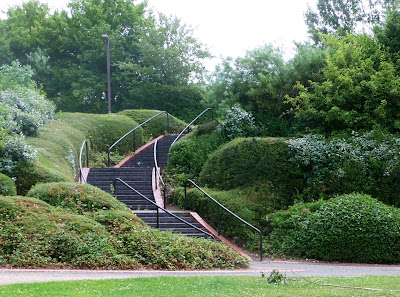 A look at the city map shows that the canal actually forms the boundary of the city to the east and north, so it's had quite an effect. Of course there are lots of bridges. Little old ones, 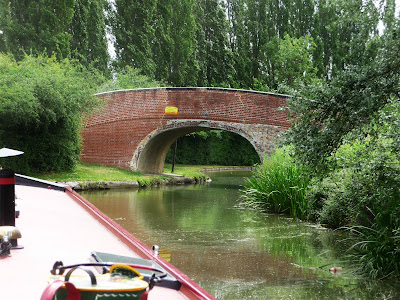 wooden footbridges, and big concrete slabs. Bridges have to have numbers of course and you can't go renumbering all the bridges down to Brentford every time you introduce a new one, so the new ones have numbers like 82A or B or C or even D! You can tell the old bridges because they have plain numbers.
Today I pulled in (solo) to Campbell Park moorings to await the arrival of Kath and our new temporary crew member, Grace. There was one mooring spot, just long enough, and there was a stiff breeze blowing offshore. My first attempt failed and I overshot. Then I got blown into a rather smart boat opposite. I backed off and had another go, pointing the bow of the boat at the centre of the gap and in forward gear just ticking over, I ran along the gunwales to the bow and jumped of with a rope just as we were about to crash. Not a textbook manoeuvre but it worked. I pulled the boat parallel with the bank and leapt on to the stern to apply reverse gear to stop us just before we smacked into the boat in front. Don't try this at home folks!
Campbell Park is the place to stop if you want to visit the city centre. Lots of buses heading that way, or you could walk it in half an hour. Prince Charles wouldn't like the centre, but I do, because it works. Clean, quiet, plenty of open space and a relaxed feeling, and a super system of computer screens that show you how to get on foot from where you are to any shop, restaurant, etc in the area. Not that I don't like Salisbury or York, but if a place is not old, then it should make the most of being modern.
News: Joe is still in hospital, better but far from well, hence us taking Grace to give Claire a break. We are now pointing South and beginning the move towards home. I have done a fair bit of the shading on the signwriting but have more to do. Pics in a later post.
Posted by Neil Corbett at 8:20 pm

It all looks rather nice there in Milton Keynes, Neil. Lovely shady green areas around the canal.

So glad to hear Jo is a bit better. May it only be upwards from here.