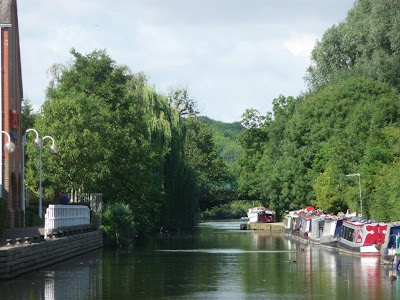 Sunday morning at Rickmansworth (Ricky to us boaters), and we wait just up from Tesco for them to open so we can buy something for dinner tonight. Church bells are iniging and there is a cool breeze in th morning sunshine. The usual stream of joggers pass by the boat, and all is well in the world.

Yesterday was an easier day. Although we did 15 locks like the day before, the fates were kinder to us. To start off with, we had staff. David came to join us for the day. Should we dispense with his former toitle of "rainman", as we had such a sunny day? Or is this just the exception that proves the rule? We are considering calling him Bipolar Man as things seem to come in extremes when he joins us. Anyway it was a great help. The other bit of luck was that about 14 of the 15 locks were set in our favour - a rare treat.

We journeyed from Apsley to Ricky in a time well under our previous day's hours and met some nice people along the way including a German gentleman on a reclining tricycle towing a kiddy trailer. he helpd us with the locks whilst giving a detailed explanation to his wee child of how it all worked. I doubt the child took much in as it only looked about two years old, and anyway it was all in German.

At Ironbridge lock we had the usual gaggle of gongoozlers and despite us only needing one lock gate open, we agreed to use both as so many kids wanted to have a push.

David's house is yards from the canal at Ricky, so we were invited for dinner with him and Heather. A real dinner in a real house -quite strange after being on the boat so long. Thanks D&H.

We could get home today if we worked hard but we have decided to go steady and enjoy our last few miles, so we cab stop at Denham tonight and then tootle home the last couple of hours tomorrow. Tonight at Denham I hope to take the photo which will replace the one at the top of our blog. Same place, new paint colours.
Posted by Neil Corbett at 8:58 am

Neil,it's amazing what kids can do these days. I mean if you go to France, you'll notice that even three and four year olds can speak French. Just astonishing, it is.