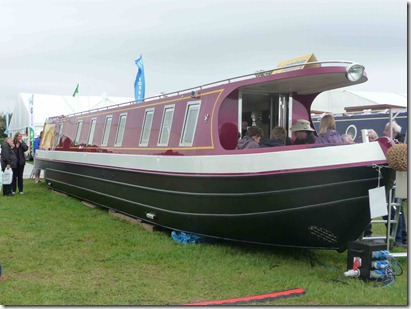 What do you think eh?  The gleaming purple cabin, the italicised windows, the tasteful bright yellow name panel, the practical white gunwales and the sweeping curve of the well deck roof.  Is this the future of narrowboats?  I’m saying nothing.

Kath was not so good at buttoning her lip.  Peering through the side hatch of this boat at the Crick show, and admiring the padded faux leather walls within, she commented to the man next to her “ I’d be embarrassed to be seen driving this along the canal”.  He seemed a bit surprised and asked her why.  “Well for a start, how long would those white gunwales last in a flight of locks?”

The man seemed unimpressed by her reply and wandered back to the rear of the boat, where we realised he was the man who had designed and built the boat.  Whoops.  Sorry mate.  All a matter of taste I suppose.

Unlike most of the show boats at Crick, this one was not commissioned, but built on spec. Rumour has it that they hoped it would be sold at the show so had not planned anywhere to store it afterwards.  There’s nothing like good old fashioned optimism is there?

I thought the show was good this year.  The boats exhibited were perhaps not to innovative as last year, but the few I saw looked sensible and well built.  Perhaps the financial hard times breed a new realism.

I had a chat to Phil Speight about polish, a chat to Calcutt about engine alignment and a long talk with a signwriter thinking of branching into the boat decoration business.  The latter, a time served signwriter working on business signs and lorries, gave me a lot of useful tips which I will certainly follow when I return to adding more script to Herbie’s name panel.

The rain of course interfered with the visitor numbers on Sunday and Tuesday, but I hear that exhibitors did OK.  One new boat was sold on the first morning.

Speaking of Sunday’s rain, yesterday I was privileged to visit the Long Buckby weather station (Rick’s back garden) and was allowed to view the data sheets for the last month.  On Sunday (river pageant day) Rick measured 23.5 mm  which is twice that of the worst day during all that rain in April.  Miraculously our merry trip from Crick to Thrupp Wharf with Adam aboard Briar Rose on Wednesday and Thursday was largely dry, although we did get caught by a few heavy showers.  It doesn’t feel like flaming June though does it?

P.S.  To those who read my pageant posts and tutted at my mis-spelling of hypothermia, I have to say that I was merely dictating the text to an anonymous typist, who for the sake of sparing blushes I’ll just call K.

Sorry Kath but I couldn't help but ROFLMAO at your comment re the new boat... Thanks for cheering up my miserable Friday :)

Nice one Kath - we just got back from our second funeral in a week and found this blog priceless. At least you stopped when you did - when I do it I usually dig myself in a lot deeper. It could have been far worse; well, actually, probably not. Love it

I did have a laugh at this! I reckon the white gunwales is a perfect example of the gap between newbie narrowboater dreams and reality. Some people, let's call her 'K', have enough boating experience to have closed that gap.
'S' will tell you I've done my own share of laughing and pointing, it's a wonder I haven't been barred from going outside.
Carrie

I hope you are going to share those signwriting tips with us Neil, or are you going to keep them to yourself?

I read from your older posts that you moor on the Slough Arm, I hoping to moor there and wondered if I could ask you what you think of it.

Piers
Drop me an email and I can give you a detailed reply.

My email address is made up of my two initials then herbie (no dots in that part) at gmail.com

I'm 6'2". Does that well deck roof come with a lifetime's supply of headache pills?