An exciting week.  Following on from the thrills of the pageant rehearsal the week continued with more drama.

Monday night saw the first night of the 2012 pan European tour of our Supergroup PRANK.  To be fair, I should also add that it was also the last night of our pan European tour.( I am an indispensable member of PRANK (Pete Rob And Neil and Kath), for without me they would be KRAP.)  Anyway we gave our all at the Rose and Crown at Sandhurst to a packed house of at least three people and went down a storm with at least one of them.  We were followed by a chap playing what appeared to be a silent guitar, at least I couldn’t hear him but his fingers moved impressively.  Fender make good solid electric guitars, but their acoustics are generally inaudible.

Then Tuesday saw Kath and I making the trip up to Crick in readiness for the rest of the week’s adventures. After unpacking we sat out on our grassy knoll to be entertained by the launching of a 70ft wide beam barge from off a lorry.  This was not an exercise for the faint hearted.  First came the enormous crane with its own entourage of an articulated lorry to carry the crane’s accessories and a van full of people who I assume were health and safety consultants and slingers.  For about half an our the crane was used to unload all its accessories, such as huge pallets to support its feet and cables and spreader bars for the lift. The sling cables appeared to be a thick as a man’s arm and took two men to lift each one.  Then came the lorry with huge boat, coming to a rest at 20 degrees to the vertical on the slope down to the crane platform.  Quite how the boat stayed on the lorry without sliding off I’m not sure.

Then came the scary bit.  The slings were slid under the boat and the tension taken up by the crane.  Now I am no expert, but I would have thought that  on a 70ft boat, the slings out to be more than 6 feet apart.  I don’t know how many tons were cantilevered out each side but it must be a great many.  Would the boat snap in half?  We had to wait ages while the assembled “experts” went into a huddle.  Half an hour in fact.  I think they were probably having a quiet pray.

Eventually they did lift the boat a few inches and the lorry drove off from underneath and scarpered before he could be blamed for any disaster.  The boat remained at its  unreasonable angle as it  was swung out over the water. 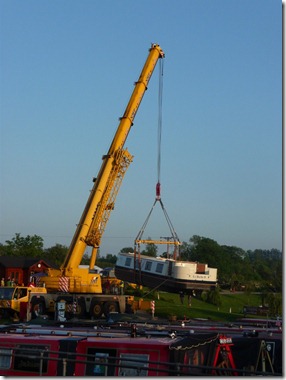 When they lowered it I assumed it would slip slowly beneath the waves with a gentle glug, there to provide entertainment for future sub aqua clubs, but miraculously it floated. and the crane and its entourage packed their bags and drove away no doubt breathing huge sighs of relief.

And so to Wednesday, when Adam came to collect us to help move Briar Rose from her moorings at Thrupp Wharf up to Crick.  Quite an easy run these days now that the flights of locks have volunteer lockies to render assistance.  Blisworth tunnel was remarkable dry, except  for the numerous air shafts which were that day acting as waterfalls.  I am ashamed to say that on approaching each of these I ducked inside, leaving poor Adam to get a good soaking each time.  However I got my come uppance later in the day when we both experienced a downpour the like of which I cannot remember before.  The met office  warned us of this but they said it would be at 4pm and it arrived 15 minutes early.  I want my money back.

Ably assisted by Rick and Marilyn who came along for the day with muscles and cake,we arrived here at Crick next day to be greeted by a gaggle of Braidbar owners (Briar Rose is a Braidbar boat) who helped slot BR into her allocated mooring which had  generous 2mm of free space at either end.

So now I sit typing this and waiting for the festival bar to open to commence the show festivities.  The bunting is up.  The flags are flying, and the man on the PA is saying  “One, One, One One”  Can these guys never count?

Hope all goes well on Sunday and the weather is kind to you. We'll be watching,so wear something distinctive like a coronet so we can spot you.