Why getting up at 6am is daft

Monday morning.  The Braunston Rally is over and we need to be on our way, but we are facing in the wrong direction.  Nicholsons's says we have a three hour journey to get to the winding hole and back.  So reluctantly Rick and I agree to get up at 6am, leaving Kath to lie in and come up with bacon sandwiches later.  It's a tough job but someone has to do it.

It's a beautiful morning as we set off, bleary eyed.  About 50 yards into the trip we round the first bend and suddenly it dawns on us that the canal here is more than 50ft wide.  So after sacrificing two more hours beauty sleep we accomplish our task in five minutes.  Bah!

Still it's an ill wind that blows nobody any good and we used up the spare time in filling the water tank from the tap outside Midland Swindlers and emptying the loo cassetttes.

We didn't set off then, for we had an assignation at nine o'clock.  Round the corner on the Oxford, we waited until at the appointed time we heard the chug chug of an old Petter diesel and the preposterously huge prow of a large Woolwich hove into view.  It was Nb Chertsey, with Sarah and Jim who had agreed to accompany us for a couple of days as we headed north up the GU.

Chertsey is approximately the size of the Ark Royal and could cut clean through the average semi trad without noticing.  I had been promised a go at the tiller to see what I could demolish.

Leaving Kath and Rick to follow behind on Herbie,  I was allowed to steer the mighty vessel  for some time.  Chertsey steers surprisingly well.  Especially when you turn your head to gawp at something on the bank.  At such times Herbie unerringly heads for the bushes, whereas Chertsey stays true to her line down the canal.

Turning corners is interesting.  You need to plan ahead.  The front of the boat arrives at the bend hours before the back, and you have to allow for the curvature of the earth I think.  Nevertheless the front comes round really well as you lean on the tiller.

Progress was rapid, largely thanks to Jim setting locks ahead as we went down Calcutt and Stockton flights.  Miraculously Chertsey did not crush Herbie in the locks and we arrived all hot and sweaty in Long Itchington by early afternoon.  There then followed a happy period while everyone lolled around in deck chairs giving me helpful hints and tips while I perspired over a rag and a bottle of carnauba wax polish along one side of Herbie's cabin.  Strangely no-one felt able to take over the task so I was knackered and ready for tea and cake when it arrived.

Long Itchington village lies well back from the canal but is worth the walk.  Intensive consultations on ipad and smartphones led us to the spledid Harvester Inn (nothing to do with the chain of the same name)  where the landlord dispensed fine ales and bonhommie and was very helpful in settling the dispute about which TV programme featured Alfredo the Frog his amazing animal orchestra.

Tuesday followed  the same vein with both Kath and Rick having a go at driving Chertsey.    Here's Kath not looking where she is going. 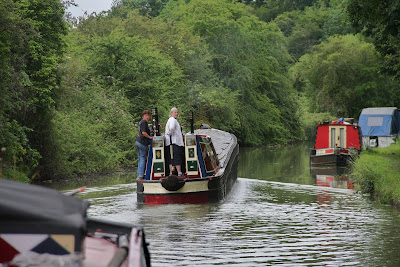 Rick did most, but he did manage to run Chertsey aground much to our delight.

My personal delight however was short lived as I managed to demolish Herbie's Morco chimney on a bridge near Warwick.

Thanks be to Sarah and Jim for being so foolhardy as to let risk their beloved vessel to us amateurs.  It's been great.

Now we rest in the very very nice Saltisford arm where we got a good mooring and an extremely warm welcome from the lady whose boat we breast up to.

Walking into Warwick we found it closed.  Well it was five o'clock.  Now I sit writing this in JD Wetherspoon's.

Tomorrow, the Hatton flight.
Posted by Neil Corbett at 6:47 pm

Was the place you turned the little feeder stream I told you about on Sunday...?