Reasons to be Cheerful - and my photo of the Queen

What a good day.  I received some bits of good news.

1. Hose pipe bans are being lifted, which means that the weather is bound to improve.  Did you notice that all the rains we’ve had over the last two months started when the bans were introduced?

2. Today, a slew of notifications from BW announcing the lifting of lock time restrictions along the Grand Union and the Oxford canal and (with certain exceptions for remedial works) the Northampton arm.

3. One of our local pubs has just installed a chef doing home cooked Caribbean food.  We went along tonight to his buffet and suffice it to say we’ll be back.

4. (not news, but I’m still cheerful about it) we’re off boating next week, first to Braunston for the rally, and then to Stratford upon Avon.

5.  Thanks to the significant number of people volunteering as lock keepers on the GU, we may well get some help going up the Hatton 21.  Volunteers were certainly out and about at Buckby and Stoke Bruerne last week when we crewed Briar Rose.

Speaking of Buckby and Stoke Bruerne, we noticed quite an unusual number of Calcutt hire boats going down that way.  Boats that I’m sure would normally go down the South Oxford.  I imagine the hire co’s have been encouraged to get customers to avoid the Oxford while the restrictions were on.  Those hirers that we spoke to were pleasantly surprised by the GU, which confirms my view that it is a very under rated canal.

Speaking of volunteers reminds me that BW will shortly be replaced by CRT.  The first signs are now emerging and in London we saw our first bit of canalside machinery sporting the new logo.  Here it is, on one of those little lifting footbridges we have over the canals.  This one at West India Quay. 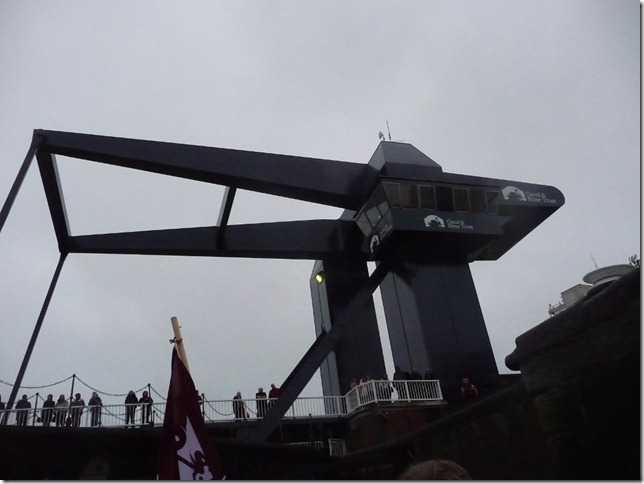 If you think this looks a bit grey and gloomy, well it was, we were locking out into the Thames for the pageant at 7.21 am. 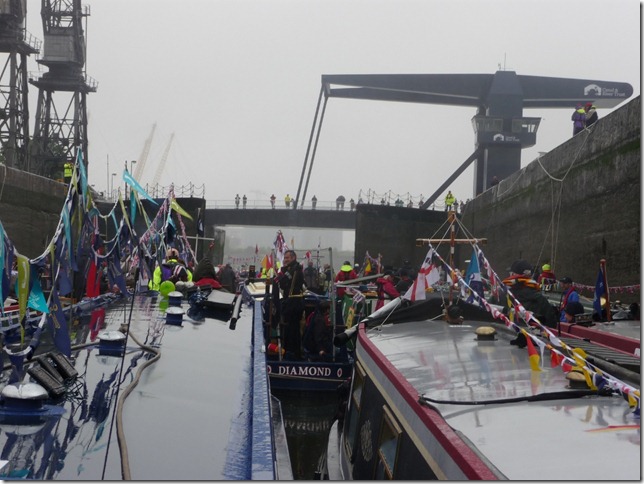 Kath keeps nagging me to show you my photo of the Queen taken as we passed by on the big day.  Oh alright then, here it is. 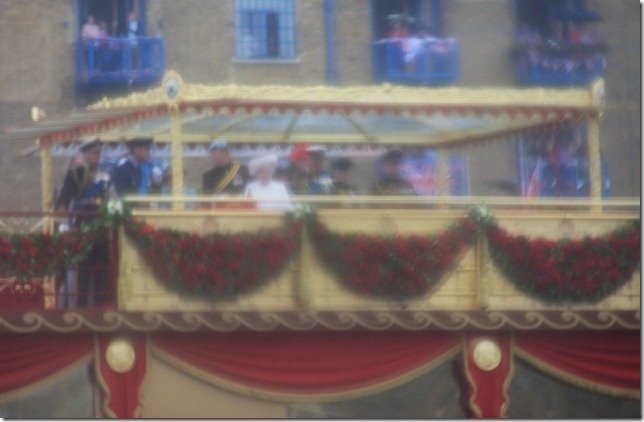 Not a competition winner I fear.  Not exactly yer David Bailey I admit.  Well, we had been standing out in the cold and rain for 11 hours and the camera lens was wet and I was wet and shivering.

But you were there, a piece of history that no one can ever take away!

I think your photo of the queen is fab - at least your camera was still working - ours had died of hypothermia about 5 minutes before the big moment!

Still thinking about it here - so much to take in and enjoy.

Plus unlike the BBC your pageant pictures are relevant and you are apologising for lack of pageant coverage/quality whereas they have only apologised for not showing some of their pointless diversions.