You heard it here first.  Shock statistic.  According to my calculations 99.99% of visitors to the 2013 Crick Boat Show did not buy a boat!  Despite this abject failure, most people seemed to be having a good time buying hats, jam, bits of rope and rather a lot of beer.  Well, that’s what we bought anyway. Oh and a nice copper lamp.

The person most pleased with his purchase was Freddie off our neighbouring boat who got a new neckerchief. 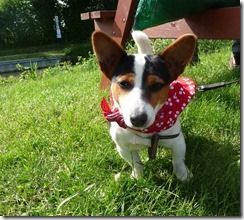 Shanks were selling  a brand new (32 hp?) diesel engine, fully marinised, two alternators, warranties  and all that for two thousand quid!  I don’t know what the regular price is but you don’t get much engine for that price these days.

We decided not to buy a boat this time as half of them cost £150,000 each.  The one that won Best in Show was the one that cost £175,000. Surprise surprise.  We would have given the prize to the £71,000 Aintree Boats 57 footer which was just as well built, painted and fitted as the dearer ones, but a lot less pretentious.  Aintree also showed a cute little 25 footer which was very cleverly laid out.

There are all sorts of clever people there to ask awkward questions of. I talked to a couple of experts about whether it would be OK to try to remove our prop whilst the boat was still in the water. They both said No. Doh.

RCR have kept rather quiet about the fact that members can get a free copy of a region of e-canalmapp for their tablet or iphone. We eventually spotted the e-canalmapp man skulking at the back of the stand and now we have our free copy on Kath’s ipad.  Actually the man was very nice, and it’s clear that they are doing a lot of work to keep the data up to date. After a short play with it, it looks pretty good, and even if you have to buy it, it’s a lot cheaper than a Nicholsons or whatever.

On the entertainment stage, Best Band in my not at all humble opinion was a tribute band playing the music of The Police – very arresting.  The only thing that put me off them was that the bloke paying Sting looked too much like David Coulthard.  Best music off stage was me and Kath playing on the back of Herbie.  We must have been good because no-one asked us to stop. Two people flocked to see us and to ask the customary questions about what Kath’s dulcimer was.  We must get one of those explanatory display boards made up.

We still had some cake left at the end, although the Halfies and the Briar Roses did come and eat some of it. John and Jan halfie took up our offer of a bed aboard Herbie on Sunday night and I am pleased to report that they were very well behaved.

The most exciting event of the weekend happened on Monday afternoon when a boat leaving the marina appeared to have been driven by a maniac and crashed into a pontoon, then the swing footbridge, then the far bank of the canal.  So hard did he hit the footbridge that it is now out of action pending repair.  The boat’s name has been noted and he will no doubt be hearing from the marina staff. Whether the boat itself sustained any serious damage, I know not.

So that was it really.

You two playing music on the back deck of Herbie, I bet that was a real treat for passers-by. Wish I'd been there to listen.
Carrie

Re:Carrie's comment I wish I'd been there too! Re: boat smashing into bridge, I am reminded of your post about the differences between sailing and narrowboating and what comes off worst

PS Freddie is just too dapper in his neckerchief and I'm glad the Halfies made the cake, tea and even B&B! My turn next time!

Val
Let me know and we'll put the kettle on. If ever you come over here and we're boating, you'd be welcome.

Lovely comment about Aintree boats, they are at the top of my list now. They seem to be excellent value for money!