Fear and trepidation No 4

Checking through my old blog posts I see that I have three times before used the title “Fear and Trepidation”.  Well I make no excuses for using it again this time, in fact maybe I should have called it FEAR AND TREPIDATION!!!, for on Saturday we are joining the Indigo Dreamers for their scariest trip yet.

Not just out on to the tidal Thames,

not just through the Thames barrier,

not just dodging the Woolwich ferries and past Barking creek,

but right underneath the QEII (M25) bridge at Dartford and on to where boats become ships and Men become Kentish.

All the way to Gravesend in fact.

I don’t know how many narrowboats have ever been out at far, but it must be very few. It’s about three times further from the Isle of Dogs than we have been before and more than half way to the open sea.  I sincerely hope the waves aren’t three times higher than we have seen at Barking because even in good weather we encountered quite a swell out there last time.  Here is a picture of us heading back towards the Thames barrier a year ago on a flat calm day. 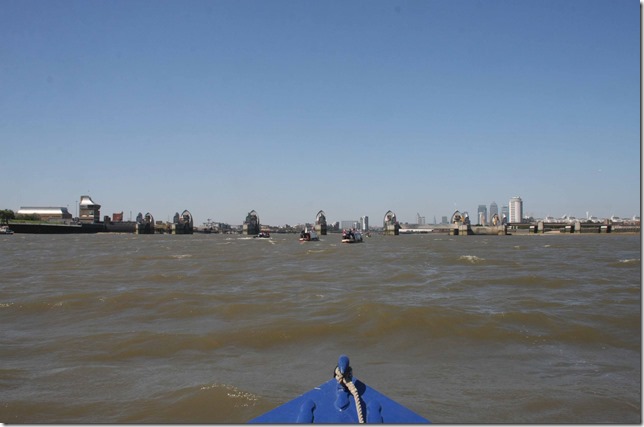 Looking on the satellite view on Google maps, it seems that when we pass West Thurrock, the river will be at least twice this wide!

I can tell you now that there is no way I would be taking Herbie out there, but I think that on board Indigo Dream, we’ll be as safe as anybody can be.  Richard and Sue are now veteran tideway cruisers and that’s why they have been allowed on this invitation only St Pancras Cruising Club outing. I expect it’ll be terrifying and exhilarating all at the same time. I may do what I did in the pageant last year and put up a  few blog posts as we go along.  If any of them say blub blub gurgle gurgle, send out the lifeboats.

Brave souls! Good luck to everyone. They invited us to go along when our paths crossed earlier in April, but we weren't sure where we would be by the time the trip was in motion. We look forward to reading about it on everyone's blog.

The Crick show post was enjoyable as well. Our blog is about two weeks behind (working feverishly to catch up). We are actually on the River Wey now. Are you heading up the Thames? If so perhaps we will meet.
Take care,
Jaq and Les

Ah that would be nice J&L except that Herbie is nowhere near the Thames! The Gravesend trip is on Indigo Dream!
Neil