Like eastern and western agents arranging a reciprocal handover of spies on a bridge, we took Grace out to Crick yesterday and exchanged her for Jacob. So now we are back at the camp site in Shropshire looking after a fifteen year old boy instead of a five year old girl. Which one will prove to be the most difficult we will have to wait and see.

The reason we chose Crick for the handover is that it is roughly half way between home and Shropshire for Claire the kids' mum and us to drive from opposite ends, AND because it allowed us all to go to the Fireworks Champions competition at Stanford Hall which is a short drive from Crick. Then we could all kip on Herbie overnight before going our separate ways this morning.

Many thousands of people gather for the event, all bringing picnics. The lakeside of the stately home gets choc a bloc with tables covered in quiches, sandwiches, cold chicken wine, beer, and all the things that people bring to a picnic. You have to get there early to get a good spot, but it is worth it, because just after dark descends three separate professional fireworks display teams each put on a display timed to music. They are each allowed to bring a maximum weight of explosive and each has a ten minute slot to impress the crowd who then vote by text for the favourite.

Finally, the organising company puts on their own display free from limitation while the votes are being counted.

Yes, I did take some photos, but stupidly I have not brought with me the lead which gets them out of the camera and into my iPad. Doh! So you'll have to imagine how good it was when I tell you that our daughter Claire said she may never go to another firework display because one of the competitors put on a display that she cannot imagine ever being equalled.

It was truly brilliant, starting off with fireworks timed to Queen's Flash Gordon. If you know the track you might imagine how well it would go with fireworks. These days, these big fireworks are fired by computer exactly timed to the music, although they do have to allow for the height some of the big shells have to reach before they explode.

This event takes place every August and there are others up and down the country. I can't recommend them highly enough.

And now we are back in sleepy Little Stretton while the drizzle feeds the little streams of the Long Mynd. Ashlet, the 1500ft hill that overlooks the campsite is covered in low cloud. Are we downhearted? Not while the Green Dragon down the road has any home made pie left we're not. 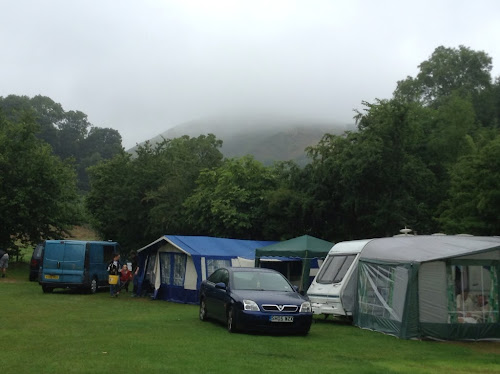 Posted with Blogsy
Posted by Neil Corbett at 2:25 pm

Organised displays can be wonderful. Sounds as if yours was too. Maybe you can post some pics later? I think Koos would swap places with you at the moment. We are still having hot weather and he finds it hard to take!