I'm a bit of a fan of the philosophical idea of Occam's razor (sometimes spelled Ockham's). What this old idea says in a nutshell is don't look for complicated explanations for anything (especially when it can't be backed up by observation) when a simpler logical alternative that can be backed by observation is available.

Having worked for many years alongside politicians I can safely say that cock up wins over conspiracy every time.

Conspiracy theorists for example seem never to take the straightforward option which makes sense and is backed up by evidence, but to look for complicated sub plots which are inevitably attributed to unknown powerful people who rule the world, although it seems to me that if such people exist, they are not making a very good job of it. One good one we heard last year was that the triangular design of the lighting pods on the Olympic Stadium was symbolic of the mysterious Illuminati, that group of unknown controllers of the world who would surely therefore cause a disaster to happen at the stadium to further their evil ends. Well, they must be right. I mean a triangle is not anything anyone might use in a design unless they had evil intent is it? Actually, I thought the link between lights and illuminati was rather apt etymologically speaking.

"What has all this to do with hedgerow fruit?" you may ask. Well I admit to not knowing of any conspiracy theories regarding blackberries and sloes. But is does bring me back to Occam and his razor. We look set to have a bumper hedgerow harvest this year. The blackberries look big and juicy and we've seen tons of sloes ripening in the towpath hedges. Cap'n Ahab and his first mate had better order some more jam jars. And the birds this winter may get fat on all the haws and rowan berries. (At last a chance to show a pic taken with my new lens. Conspiracy theorists might suspect that this whole post was created in order for me to use this photo, and they might be right) 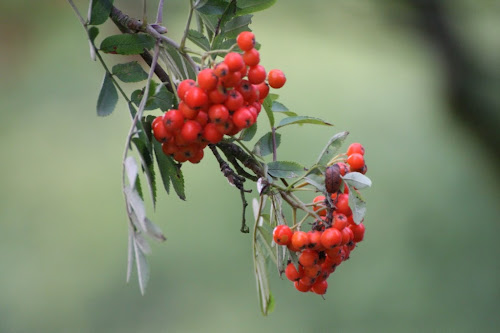 When I mentioned this to a friend the other day, the immediate reaction was that perhaps we should therefore expect a hard winter. It is a well known belief that plants and animals can foretell a hard winter and so they stock up in advance. Well, I don't know what they were doing last autumn when the hedgerow crop, particularly of blackberries, was the poorest for a long time, because if you recall, we had a pretty nasty cold winter afterwards.

Now Occam would say isn't there a simpler explanation. Well of course there is. All the experts tell us that a cold wet spring followed by a hot dry summer is perfect for growing fruit. I read on the BBC news site that we are expecting the best apple crop in years for precisely these reasons.

Nice though it is to observe old folk tales, I find it easier to believe that fruit grows well because of the growing conditions than that plants can foretell future weather patterns.

Posted with Blogsy
Posted by Neil Corbett at 9:27 am