Ever since the Met Office left Bracknell and moved to Exeter taking all my meteorologist friends with it, I have lost all control of the weather. Three times in the last three days, we have got caught in heavy rain only for it to stop as soon as we had finished boating. Now we have stopped for the day and I am sitting inside typing this(with one finger), the sun is beaming down outside.

Still, we are pleased because we managed to pull in Herbie at one of our favourite mooring spots, the park at Great Linford with the lovely low ceiling'd Nags Head pub just visible at the far end. 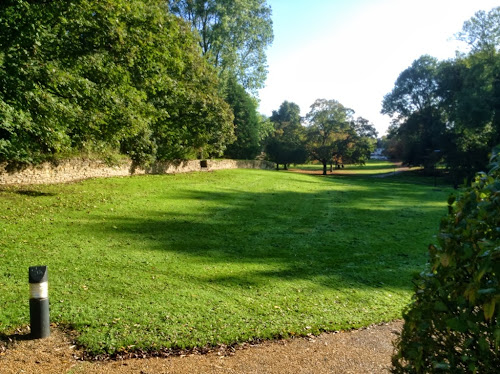 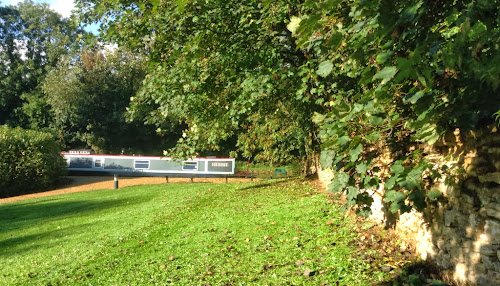 This is quite popular spot, but easily missed if you don't know to look out for it. Interestingly while a lot of people are up in arms about the £25 overstay charge at the new trial visitor mooring sites, I've never heard any complaints about Linford or Campbell Park moorings in MK where the Parks Trust threaten a charge of £50 a day after 48hrs. Not that it bothers us, we'll be away tomorrow morning.

Last night we moored in Campbell Park and caught the bus into the bewildering maze that is Central Milton Keynes. After getting lost several times, we concluded our shopping and set off to spend our Camra Wetherspoons vouchers and to take advantage of their Tuesday Steak deal. Unknowingly we chose the most distant of the three Wetherspoons in the city and after a walk that would tax Mo Farah, we eventually staggered in, only to discover that their grill had broken and they could do no steaks. It was only then that they directed us to their other bar much closer to the centre. Bah.

This morning we had a visit from Kath's sister Carole and husband Pat who live not far away. I only mention this to record my excuse for eating fresh cream cakes this morning. Well it would have been rude to reject them after they had brought them wouldn't it.

One last thing I must mention before I leave you in peace is crab apples. This year's crop of these barely edible little pommes is little short of stupendous. Some bits of the towpath hereabouts are so deep in them that passing walkers are pressing enough juice out to turn the canal into cider. We've seen squirrels eating them ( the apples, not the walkers) and a few ducks making somewhat comical attempts to eat them. Years ago, we used to make crab apple jelly which if I remember rightly entailed boiling them up and straining the pink juices through a muslin cloth. All a bit messy on a boat although I don't doubt Cap'n and Mrs Ahab will be making about ten tons of the stuff.

Posted with Blogsy
Posted by Neil Corbett at 3:16 pm

We saw a swan swallowing a crab apple whole. You could see the lump going down its neck!

Fruit seems to be bumper crops everywhere this year!