Hot Dog! A tame heron and then some towpath issues

Two items to tell you about today, one and amazing encounter last week, and the other an insight into London towpath issues.

Of course I never have my camera to hand when we see something extraordinary.  This time it was a lady virtually hand feeding a heron with hot dog sausages  I’ll tell you where you can see it because apparently she does it most days.

On the Grand Union at Harefield, in the shortish ( and very pleasant) pound between Coppermill lock and Black Jacks Lock is a widebeam boat, been there for years with a sign on it saying “For duck’s sake slow down” or something similar.  Some of you will have seen it for sure.  Anyway, a lady was standing on thee back of said boat feeding the ducks and just feet away on he towpath, just out of reach of the ducks, a heron.  She said he comes most days for his mid morning feed of hot dog sausages!  She should sell tickets!

Earlier this week I attended my first monthly Volunteer London Towpath Ranger meeting, for volunteers in the Western section (Paddington arm and GU Brentford to Ricky). Its a bit frustrating for me because most of the activity is more central London and the Regents canal and out west we are still waiting for the distribution of signs , tools etc.  Never mind, later this month we will be out doing stuff.  Managing cycling on these towpaths is a bit of a dilemma. Whilst cycling is seen as  “a good thing”, the behaviour of many cyclists leaves much to be desired.  We are putting up signs making it clear that pedestrians have priority, especially through bridge holes, and asking bikers to drop the pace.  Also the issue has been raised of cycle lights at night dazzling walkers so that they can’t see where they are going.  How do you get bikers to dip their headlights? Of course on the more rural sections where it is darker, we don’t think it’s safe to ride a bike at al on the towpath at night.

After the recent storm, the contractors were pretty quick to clear major obstructions like big trees blocking towpaths and canal.  Here’s one on the offside that needs looking at. 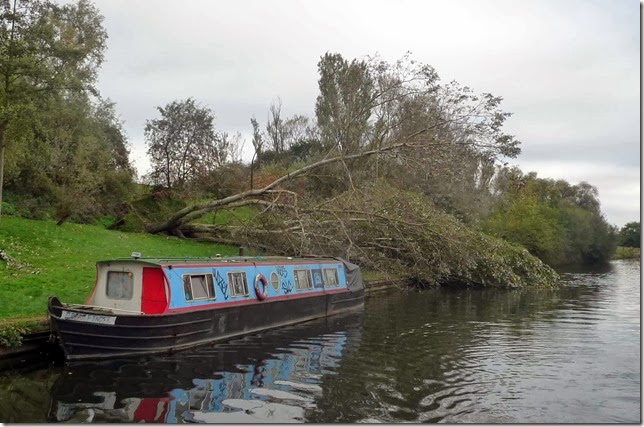 Nothing serious there you might say, but tell that to the boat the other side of the tree: 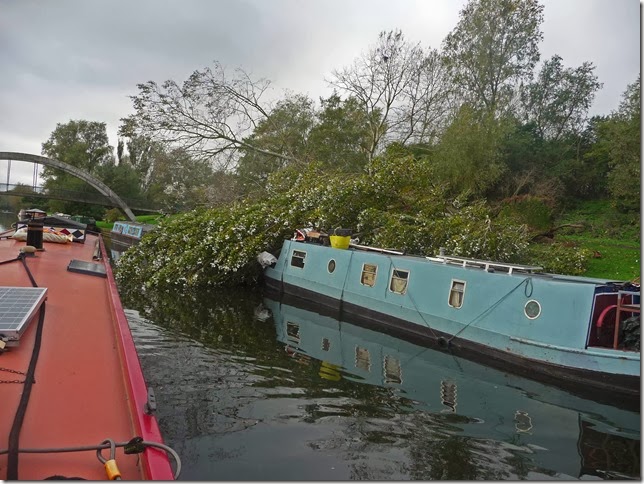 It must have missed by inches as it fell.

There does remain a lot more to do, and we were assured that they would return to do the “inconveniences” like this 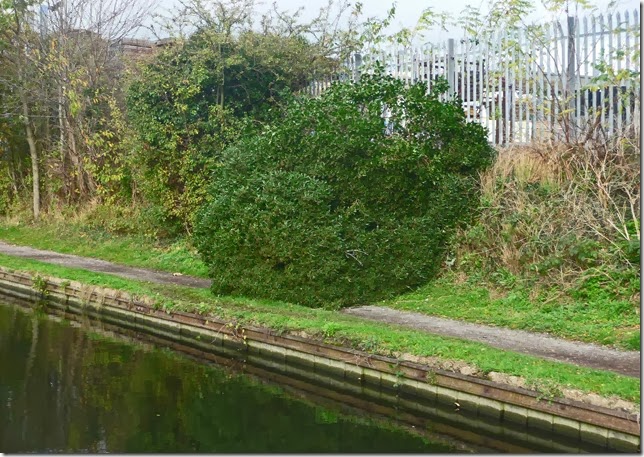 after the “stoppages” were all clear.  We towpath rangers will be carrying our minor vegetation control in the normal course of our patrols.  We are even being issued with folding secateurs to carry with us.

Boaters will be interested to know that I raised the issue of dog poo, (I’ll spare you any photos) pointing out that the narrow grass strip between canal edge and towpath seems to be a favoured spot for dogs to deposit their poo.  This is mostly not an inconvenience to walkers and cyclists but for boaters it is a major pain in the posterior as we get on and off our boats and hammer in stakes etc.  There is also the issue of people who pick up their dog poo in a plastic bag, and then drop or hang the bag anywhere.  It seems unlikely that CRT will be providing any dog poo bins, because they don’t have anyone to empty them.  I shall continue to press for something to be done. Its all down to education and pricking the consciences of dog owners. Maybe they don’t realise the effect on people mooring boats.

They have been carrying out counts of cyclists and walkers during commuter hours in towpath hotspots particularly along the Regents canal. It turns out that cyclists outnumber walkers by three to one. At Victoria Park during one morning rush hour they counted over 300 cyclists and a hundred walkers using the towpath.  I don’t think we’ll get anywhere near that number in any of “my” areas out west, but I have suggested a count of towpath users in popular Sunday walk / ride areas like Denham.

Well that’s all I can remember from the last meeting.  If you do have any towpath issues in the greater London Area, drop a comment on this blog and I’ll either pass it on or try to get some action.

I don't quite get people who put their doggy poo in a bag and then just leave the bag. That's hardly better than not picking it up at all. I have a dog, and also have a boat, so know it from both sides. Love the heron story, Neil. It sounds as if your new job is going to be pretty interesting! We'll look forward to the next minutes :-)