And so we say farewell to the Great Metrollops and head back West to where buses don't run every six minutes. Our stay in Paddongton basin was somewhat marred by the fact that Kath caught a cold and hadn't the energy to paint the town red, or any other colour come to think of it. She's on the mend now.

From today, half of the basin is given over to Winter Moorers, so taking into account the fact that at least half of the remaining spaces seem to be taken up by people with various notes in their windows explaining why they are not moving, there ain't much chance of finding a vacant visitor spot. This is not my idea of what the Trust should be providing for visitors to our Capital city.

While Kath was tucked up in bed with a novel, I took another trip to Denmark Street to ogle at the guitars and leaf throughout the music books. Since my recent purchase of Maffis old strat, I have had my eyes opened to the amazing number of different models of this iconic guitar. I think I may eventually need several of them. I have also now discovered why it was such a revolutionary guitar back in 1954 or whenever Mr Fender invented it. It is indeed a clever piece of engineering with more "new" ideas than you can shake a stick at. No wonder then that I was able to buy a Haynes manual for it! A ripping good read for an anorak like me. I shall probably sleep with it under my pillow.

Today we have journeyed back to Greenford which conveniently is about half way back for us. Of course it has the other convenience of having the Black Horse. En route we passed a lot of fallen trees from the recent storm. 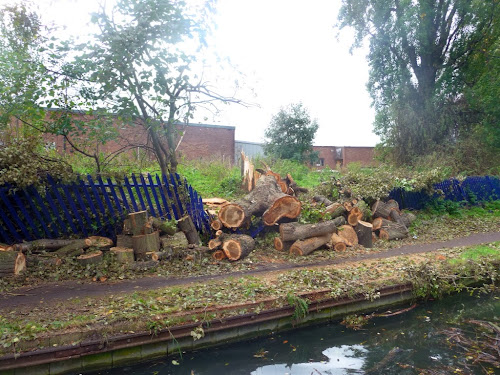 What surprised me was that a number of them were broken off a few feet above the ground rather than being uprooted as in the infamous Michael Fish storm. We would have stopped to pick up logs for firewood, as the nice men with chainsaws had been out dismembering the fallen, however the logs that weren't too huge to deal with were mostly poplar, which I read recently is a useless wood for burning.

Lastly, a sign that the Trust is doing something useful somewhere at least, we passed two mega barges today, the first full of safety fencing, no that's not the useful bit, and the second full of new lock gates. Heading for the Regents canal I suppose. 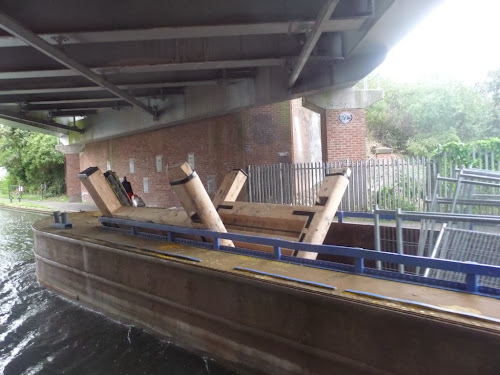 Posted with Blogsy
Posted by Neil Corbett at 4:09 pm

Poor Kath. I hope she mends very soon. This guitar thing seems to be addictive. A certain K of my own acquaintance seems to find reasons why he should have at least twenty of them. I'm just glad he can't actually afford it! As for sleeping with the manual under the pillow…I recognise that one too - I do that :)