Yes the Golden Envelope lies on the rostrum and the name of the winner lies inside.  The announcer, suitably clad in Tuxedo and bow tie gives a nervous cough and introduces the award thus:

This year’s Special Award is given for Sufferance and Munificence, and in case like me you are not sure what that means, let’s look at the dictionary.

Sufferance: “Sanction or permission implied or given by failure to prohibit; tacit consent; tolerance.”, or in this case not turning their nose up at a couple of old fogies (i.e. me and Kath) on a semi trad boat (often despised by “proper” boaters) with synthetic fibre ropes hanging off their tiller (sacrilege). But not just tolerating us -  actually inviting us to nestle Herbie amongst the proper boats at a Historic Narrow Boat Club rally and introducing us to their friends.  We are not worthy.

Munificence: “the quality of being munificent, or showing unusual generosity” or in this case honouring us by allowing and encouraging us to disport ourselves musically aboard their historic boat on two very public occasions. And as if that wasn't enough, they also treated Herbie to a lovely Klaxon "harooga".

Well I think that lets the cat out of the bag.  Anyone who had followed us this year will know that we have twice enjoyed the hospitality of the winners during historic boat events this year.


Yes the 2014 Herbie Award “for Sufferance and Munificence” 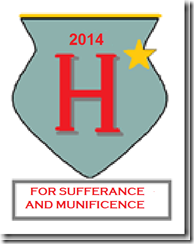 Sarah and Jim aboard Nb Chertsey

Thank you Sarah and Jim, it was great.  And thank you for showing us that the HNBC lot are a nice tolerant bunch of enthusiasts and not at all sniffy about other boats.

Despite the Herbie Award having no monetary or other value whatsoever, you are now in the company of some equally great former winners.

Oh how lovely. You've made me cry.
Thank you for your marvellous company and hopr to enjoy many more such occasions in the future.

Well done Sarah. Also congrats to Kath and Neil for being Christmas blogger.

Well done all! And fantastic to end the Herbie awards in this way - on Christmas day! I'm looking forward to more Herbie following next year!

Sarah, I often make people cry - but usually it's with rage, boredom, frustration or some such. Enjoy your new found fame and glory and don't blame me when you get pestered for autographs:-)
Neil

I hope you've explained to Sarah the great obligation that goes with the glory - as holders of the award for hospitality we now feel like undeserving pretenders unless we offer guests food and/or drink every 15 minutes while they're on board.

And we tell everyone about our "Herbies" :-)

I'm not sure which makes our guests more worried.....