There might be some CRT boat checker somewhere with a headache today. He probably thinks he's losing the plot, because earlier in the week they will have spotted us moving southwards down the GU, then they will have seen us moored up in Great Linford for two days, still facing South, and today they would see us back up at Wolverton, still facing South. Perhaps they will think we reversed for an hour and a half this morning! all will be explained below. 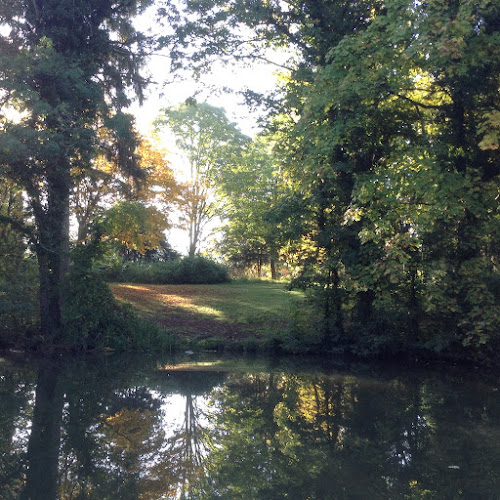 Despite some inconsiderate person having moored in our favourite spot in Great Linford (how dare they?!), we had a pleasant berth for the last two nights almost opposite it and were compensated by this nice view out of the window.

Yesterday we caught the bus into the great metrollops of Milton Keynes to go and see Mr Holmes at the cinema. After years and years and years and years of never going to the cinema we have started this year to go most weeks, courtesy of the Odeon Silver Screen programme which puts on very good films each week for over 55s for three quid including coffee and biscuits! Not old films, just maybe two or three months after general release. I'm becoming quite a film buff. Mr Holmes was very good. Go and see it if you get the chance, or I suppose wait until it comes on telly in a year or two.

Returning to the boat last evening we discovered that Herbie must have had her pins pulled out by some careless boater going past too fast, and some kind person had banged them back in, and added a third one on the centre rope. Thanks whoever you are. One of the pins was hammered in so deep that it took me five minutes to dig it out this morning.

Actually it's not to fool the boat checkers that we have retraced our steps to get back to Wolverton. It's because I have to catch a train tomorrow to meet Rick at Long Buckby, when we will nip up to Leicester to visit the Space Centre along with the old boys of the engineering association from where we both used to work in 1970.

Did you know the boat checkers log us into their system even when they see us cruising along the canal? I didn't until I saw one doing it the other day. I suppose some people will complain that it's all a bit too Big Brother, but I don't mind if it helps to deal with the people who pretend to be continuous cruiser when they are not.

Posted with Blogsy
Posted by Neil Corbett at 4:51 pm

Lovely photo. You have a very nice blog. :)

I must admit when re-mooring errant boats, I virtually bury the pins if the ground is soft, to minimise the leverage effect. I never really understand when I see pins half in, with the rope attached a foot above the ground...

We volunteer moorings wardens only check boats on time-limited mooring sites, but I do know that the full-time staff do record every boat they see on their beat. The system we log the data into has fields for "on visitor moorings" or "not on visitor moorings" for each location, but doesn't distinguish between moving boats and those tied-up.
Data can only be uploaded when there is an internet connection, so the "warden" you saw might have been uploading data he or she'd collected earlier?

Anyway - if you're doing nowt wrong, you've nowt to worry about.

How kind of someone to put your pins back in! Whoever got them out must have been going a tad too fast! I wish we got movies for over 55s here…I might go to the cinema more often. I think the last time was about fifteen years ago.

Thanks Jim, interesting This bloke was definitely logging us on the move because he said so when I asked him.