I wonder who thinks up the names for CRT work boats.  "Pride of Slough" always raises a wry smile. Yesterday I was out driving Pride of Uxbridge for a towpath clear up volunteer task force. 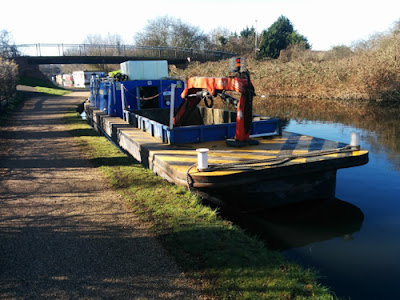 After an early start, ploughing through the ice up to Bulls Bridge we arrived at the chosen spot where the volunteers were waiting. About eight or nine volunteers showed up, including three local women police officers.  They all worked very hard for several hours picking litter and rubbish from the verges and the hedgerows around Southall on the Paddington Arm.  All I had to do was get the boat there and follow them along as they chucked bags of rubbish into the hold.  By the end of the day, they had covered a mile of towpath and filled about three quarters of the large hold, mostly with litter, but also an interior sprung mattress, a couple of wooden doors and of course the obligatory supermarket trolley.  We also collected eight or ten hypodermic needles.  They get safely placed in a "sharps" box.

I suppose I had the easy job, except it wasn't.  To anyone used to steering a narrowboat with a tiller, boats like Pride of Uxbridge are a nightmare.  Here's a picture of the driving controls 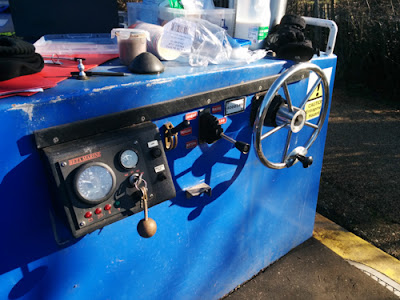 A lever for the throttle, then one for forward and reverse and then the "steering" wheel.  The wheel has eight turns from lock to lock and no indication of which turn you are on, so you have to try and remember, or look back to see if you can see the propeller.  There is no rudder, the propeller itself swings from side to side.  The boat is heavy and very slow to respond, (in fact very slow in general) so you wind the wheel four times to the right and five seconds later the boat starts to turn right, but being heavy it over swings.  No good turning the wheel back to the middle, you have to spin the wheel several turns left to stop the boat swinging, and then of course ten seconds later it over swings the other way.  You get the idea.  I was following a slalom course down the canal half the time.

Of course I also had to manoeuvre the thing backwards and forwards on and off the bank to pick up the rubbish.  Not easy, because as soon as you put the boat in reverse, the boat steers the other way, making it very hard to come to a straight stop by the bank.  By the end of the day I was exhausted.

Still I would like to persevere and have another go soon.  I will master it if it kills me.

You are all heroes and heroines. Fantastic work by the volunteers, but isn't it grim that there is so much rubbish left along the canal sides? That boat really does look a heavy old beast, but I'm sure you'll beat it!