It was quite a surprise to emerge from a warm and cosy boat this morning to find frost on the handrails. 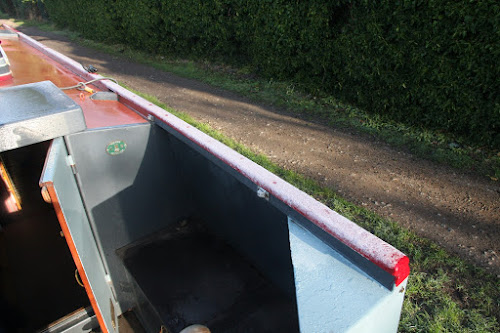 Despite that, it was a glorious morning and perfect for cruising and we set off early towards the exotic delights of Uxbridge. Just through the first bridge we spied George and Carol's leviathan vessel Stll Rockin'. We tooted our horn but either they were not in or they were still abed. Next time maybe.

We cruised just about as slowly as we could so as to get the batteries charged on what is after all only a short journey. The approaches to Uxbridge from the south could never be described as scenic, but in the sunshine it was lovely.

The afternoon in contrast, was pretty gloomy. Not meteorologically speaking though. We went to the cinema to see Suffragette. It's a very good film, well acted and all that, worth seeing, but don't go to see it to get cheered up. Those women sure had to suffer for their suffrage. Did you know that of the advanced European nations, the U.K was one of the last to give women the vote? Shame on us.
Coming out of the cinema there was something to cheer me up. Yesterday as part of my Ranger duties, I sent in a report of a fallen tree blocking the towpath on the Slough Arm, and this afternoon I got a message back to say Fountains had been called out and had cleared it. Now I bask in the warm glow of self satisfaction.

While we've been moored here outside the Swan and bottle I've had one eye on the towpath to see how busy it gets here. It doesn't. We had earmarked it as a potential spot to run a Share the Space event, but I think I'll unrecommend it. I think tonight we might pop into the pub to sample their wares, being moored right outside it would seem rude not to. Also there's something especially pleasing about turning out of a pub and only having to walk ten yards to get home.

Posted with Blogsy
Posted by Neil Corbett at 7:24 pm

Ah there is someone else out there like me!!

"Why are we going so slowly?" says Sir.. He is so impatient! "Why waste diesel?" says I.

Tomorrow will be the same.. Low usage of diesel high input of electrics!

Hi Neil, we saw that you were just a couple of hundred yards in front of us from your blog yesterday morning and we’re sorry not to have been able to say hello to you both. We’re currently in Scotland celebrating the 21st birthday of our eldest grand daughter! Back on SR on Monday, perhaps we’ll see you on your way back? Enjoy your cruise.

A great way to keep an eye on your ranger area, Neil! I can imagine there's nothing like cruising on a bright frosty morning...wouldn't catch me at it though...haha. Seriously, it sounds lovely! Well done on the word count. I' up to 25000 on mine, so I'm tailing you :)

Carol, that explains why it all looked closed up when I walked past on Tuesday evening too. Sorry to have missed you. We'll be back home by Sunday, but should you be going further south on Tuesday morning , you might see me driving a CRT work boat which I'm taking from Adelaide dock to a little way up the Paddington Arm for a towpath task force job.

Vallypee you might be behind me in number of words but I suspect you might win on quality rather than quantity!