Phew, what a busy few days we've had. We arrived in Oxford on Thursday, mooring up at 'Arry Stottle's bridge where the good ships Milly M and Bones were already tied up. So that was Thursday evening sorted out, cleverly avoiding all the election kerfuffle by joining Bones and Maffi for a long chinwag and too much red wine. Jolly nice it was too.

Next morning we cruised on down to Jericho where there was plenty of space to tie up (more than could be said for 24 hours later when it was full up. Note to self and others:Try to arrive in Oxford before the weekend, and early ish in the day. Do that and you should get moored up with no problem.)

Then it was on with the walking shoes and a long march to and round the Natural History Museum where we saw a lot more bones. Rather older than Nb Bones or Mort Bones or Maffi 's old bones. 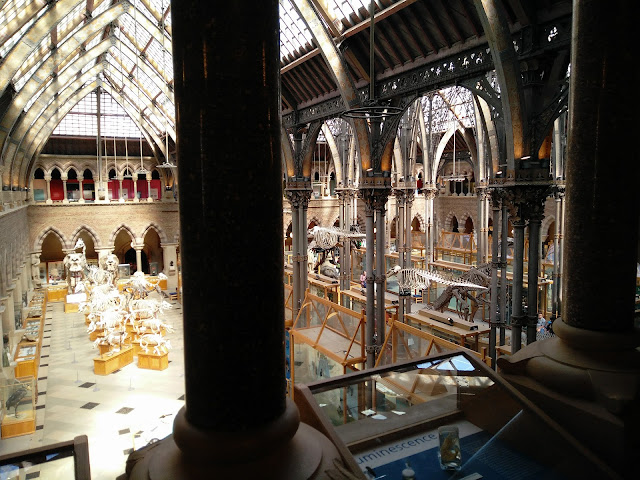 Then of course through the back to the Pitt Rivers museum which despite having very few bones is still excellent and highly eccentric.

Next morning for a change we visited a couple more museums starting with the truly excellent Museum of the History of Science where a very entertaining guide pointed out lots of stuff we would have otherwise missed. He also told us the story of the nasty Mr Ashmole who tricked the nice Mr and Mrs Tradascanth (of Tradascanthia fame) out of their lifetime collection. Anybody that likes instruments (not the musical type) exquisitely made of brass would love this place. (Note to Rick: a couple of clocks you need to see.) I can't imagine anybody not wanting one of the lovely little pocket sundials, of which they have a large number. Well, I do anyway. We should have also seen a blackboard still covered in calculations scribbled by Einstein, but it had gone off to be cleaned or something. I seriously hope not wiped anyway.

Peter had emailed his Cambridge pals to get recommendations of good pubs to try in Oxford. I'm not sure he has any pals in Oxford, nevertheless they came up with the goods and directed us to the Turf Tavern, which despite it's name has three gardens but no grass. Previously unknown to us, this is apparently a very famous pub, having been frequented by Oscar Wilde, Ernest Hemingway and Bill Clinton among others. Sadly none of them were there at the time although hundreds of other people were. It is claimed that this is the place where Bill Clinton did not inhale. Anyhow we liked it a lot and drank some very nice apple and pear cider.

Then on to the Ashmolean museum having been told by the guide at the other place what a complete RAT Ashmole was! By now we were getting a bit over museumed, so we went on to another place recommended by Peter's pals which was George and Davis Ice Cream cafe. Once again the pals had turned up trumps and it was small, out of the way and full of delicious things. Probably some of the best made ice cream I have ever had.

Having been worn to a frazzle escorting Peter around we then forced him onto the X5 bus back to Cambridge and Kath and I crawled back to the boat exhausted having both doubled our daily steps targets.

So here we are tonight back at Thrupp, recuperating after doing all those flippin' lift bridges you have to do to escape from Oxford.
Posted by Herbie Neil at 5:35 pm

I am just catching up on boat blogs. Love the previous "Shiver me timbers post!" Good stuff!! Lovely to read you were in good company with Bones and Maffi, and I love the pictures of the museum and info on RAT Ashmole. Perhaps our bows will cross. I will be to-ing and fro-ing from Napton to Braunston for the next four weeks as more work gets underway with NBV.

As for mooring up in Oxford with no problem, that could be a problem, coz you won't be able to get No Problem XL up the Oxford Canal any more!