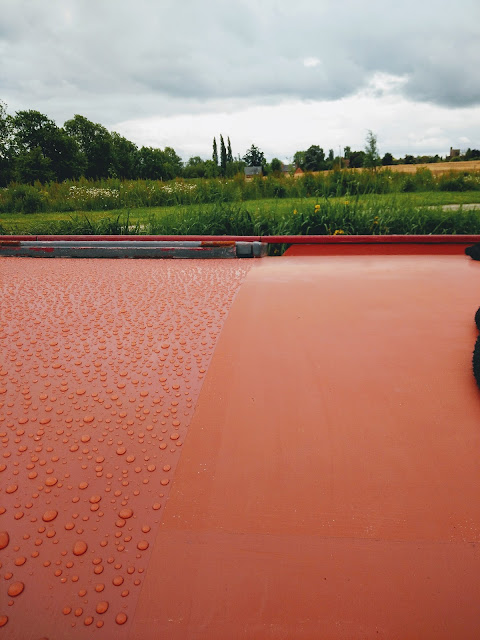 On the left, a bit of Herbie's roof I repainted this week, on the right, the old surface. Amazing how the rain water beads up on the new paint.

Tonight we pause once again in Banbury having collected Peter off the train. We thought we ought to introduce him to the delights of the Reindeer, but it was closed for a staff meeting! Never heard of a pub doing that before. Anyhow it turned out to be a good thing because we took someone's advice to try the White Horse which turns out to be a very nice pub with equally nice beer, although we only had the one pint each! I fear we shall have to return on another occasion. I recommend it.

Today has been a day of fierce competition between me and Kath to see which of us will put the first scratch on Herbie's newly repainted port side tunnel. Miraculously it survived unscathed. No doubt I will break my duck tomorrow. Perhaps we can persuade Peter to do it for us. He generally has a talent for such things. Despite not being the most practically gifted person, Peter is a very handy person to have around as it saves us looking up stuff on Wikipedia. This evening he gave us chapter and verse on various versions of the Old Testament as recognised by various religious groups (although he is not remotely religious) and later, on the principles of neural networking, something he has been playing around with at work. One day I will ask him about something about which he knows nothing, but so far I haven't been able to come up with such a question.

He did relate on more fun fact. When we were at the Cambridge beer festival recently, we were able to download and utilise phone apps listing the festival beers and their properties. The apps also showed you in real time how much of each beer remained available. According to Peter, the web server which lay at the centre of this system was a little Rasberry Pi no bigger than a fag packet. In my early computing days it would have needed an IBM mainframe in a big air conditioned room. Well actually it wouldn't because the www hadn't been invented. Blimey I'm getting old. Only this evening I was remembering that things like Tv sets and sofas were priced in guineas.
Posted by Herbie Neil at 10:09 pm

I wonder why water stops beading on old paint and when that happens. Is it overnight, or is it gradual, I wonder! Maybe Peter knows :)

Val, according to Peter it's all about surface tension and clean shiny surfaces as opposed to matt, dirty ones.