In two hours at Denham deep lock yesterday afternoon three of us Towpath Rangers encountered approx 120 pedestrians and 55.  cyclists many of them went away clutching our little free canal maplets cyclists with tips on towpath etiquette.  I think it does more good for general canal PR than changing behaviour, but it feels like a nice thing to do.  The pedestrians in general are keen to chat and ask questions.  A good few of them popped into the adjacent Fran’s Tea Garden for a cuppa or an ice cream cos it was baking hot. 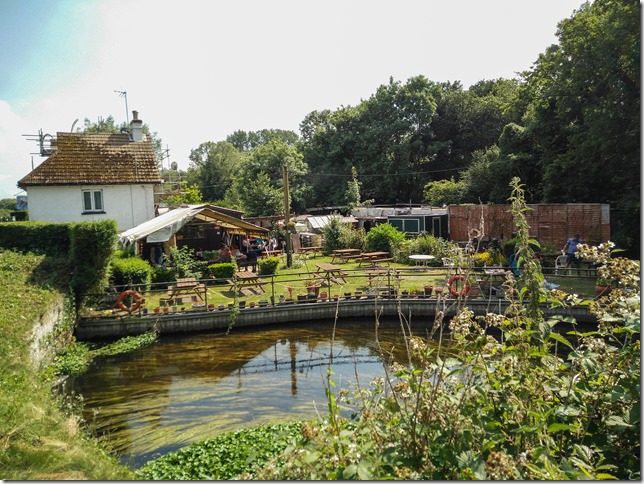 For those of you who don’t know the spot, that’s the River Colne which flows under the canal adjacent to the lock.  The house is the former lock cottage.

The metal beams on the lock gates were barely touchable in the heat. I didn’t count the boats passing through but there were about seven or eight in the two hours, and an alarming number of them were clueless about how to work a lock.  Now I’m not a CRT trained lock keeper and although I was wearing CRT kit I had no life jacket so I assume that I was breaking rules if I assisted.  But if a couple of clueless lads were doing it all wrong, not knowing one end of a windlass from another, what would you do? There is a plastic cruiser waiting to go up  in the empty lock and the lads  open just the top gate paddles.  They seemed unaware of the ground paddles.   This is the deepest lock on the Grand Union. Quite apart from the fact that the lock would take an hour to fill that way, the boat was at risk from the wash from the gate paddles. I couldn’t resist. I helped “unofficially”, patiently showing them what to do in what order.  It wasn’t just the one clueless boat by the way, there were two or three more.  Goodness knows where they all came from.

I may well have averted a safety incident in this way, but no doubt because I was in uniform and not an authorised volunteer lockie, I had exceeded my brief and put CRT at risk of blame if anything went wrong.

Maybe you need some "civvies" hidden away somewhere so that you can don a suitably incognito superhero outfit when need. A portable red phonebox as per Superman would do nicely!

I think you did the right thing - it would be so much worse if a perfectly qualified CRT volunteer just looked on while a boat sank in a lock when you could have prevented it!