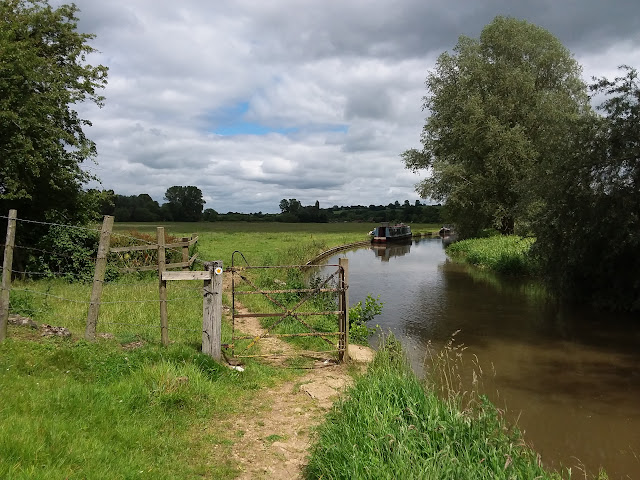 Here we are at Somerton meadows, which is about as peaceful and pastoral setting as you could imagine. Well it would be if it weren't for the tractors hay making in the fields behind us and the pilot practising his airplane skills in the sky above us and the cows mooing and munching 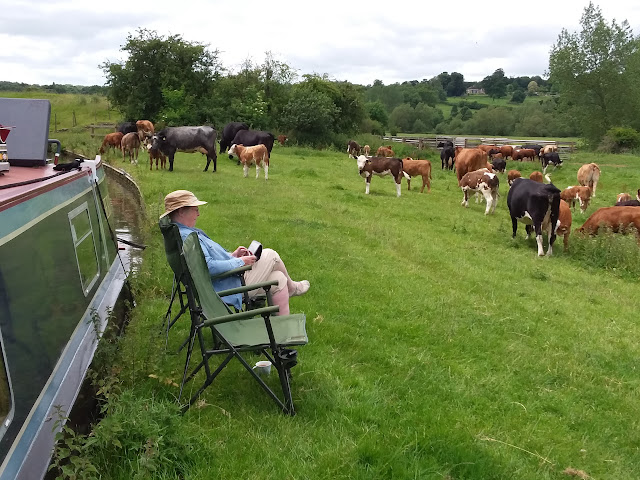 and the trains on the nearby railway line. One of them this morning was a steam train with vintage coaches. At least the helicopter sitting in the field across the Cherwell is at rest.

Still, it is lovely here on a summer's afternoon. Mustn't grumble. It is a beautiful meadow.

Last night we tied up at another peaceful spot just below Allen's lock at Upper Heyford. Lovely. Out with the deck chairs, feet up. Aaah. Rest.

Then round the corner came a boat needing to go up the lock. And another and another, and another, and another and another. Six boats all within the space of fifteen minutes. So of course they were queuing down the canal, jumping on and off their boats, asking who was next, "were we waiting to go up?" etc. Most of the were from the hire base at Lower Heyford, all wanting to get away at the same time, so this was their first lock since boarding the boats fifteen minutes ago, so most of them didn't know what the procedure was. Luckily the boatyard had sent up a man to help them through. It was all quite jolly really, but the poor boaters at the back of the queue had to wait about an hour. I fear they were going to be late for their reserved table at the pub in Aynho.
Posted by Herbie Neil at 3:31 pm