Most of my life is wasted on useless thinking. For instance, I couldn't begin to count the hours and the sleepless nights I've expended in trying to decide which eight records to take to Desert Island Discs. It worries me still.

Lately though, other things have been on my mind

a)How come Theresa May has appropriated Peter Crouch's arms and legs? Has nobody else noticed? Is his limbless torso concealed in the cellar at number ten, waiting till she gets the boot and he can get his arms and legs back?

b)Why doesn't somebody punch Donald Trump on the nose (although M. Macron had a good go at breaking his fingers - good on yer monsieur) and how come people still refer to him as leader of the free world, when it is clearly (thank goodness) Angela Merkel?

c)More to the point, why did I think it was a good idea to paint a patch of Herbie's roof the other day when it was hot enough to fry an egg? (I kind of got away with it but the result is less than perfect.)

a) Water levels.
Last week we tootled up and down a bit of the Oxford and the water levels were up and down like yo yos. Down at Twyford Wharf, Herbie and two other boats all ran aground at the same time. It was quite comical. Then today the water outside Cropredy Marina is as high as I have ever seen it. We can only assume the CRT are releasing more water from the reservoirs. Don't they know it's supposed to rain a lot next week? Doesn't anybody listen to Thomasz Schaffernaker? (I probaly mis-spelt that, sorry Tom) Anyhow, all they need to do is to ask me if I'm taking the boat out for a couple of weeks and as the answer is yes, it's bound to rain.

b) The young uns are taking over
Last week the crew was Grandkids Grace and Jacob. Grace might only be 9 but she's turning into a really good helmsman, even negotiating the Oxford's notoriously narrow lift bridge holes with hardly a comment from me. It's good to know that when I'm old and incompetent (nearly there), she can take over the helm. Her helming is a bit better than Kath's selfie taking, but here we are anyhow. 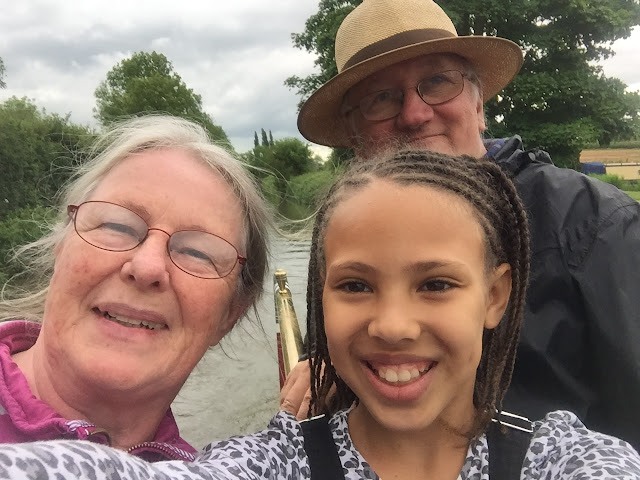 Now we just need to buid up Grace's muscles for the stiff gate paddles down this way. She'd better hurry up before mine wither away.

Next week our son Peter takes her place on board as we endure the rain all the way down to Oxford. He's not nearly so good on the helm but then he's only about 38 and his mind is on higher things.

c)Politics
As we're away on the boat on June 8th I have already cast my postal vote. Once again my constituency has failed to attract the participation of the official Monster Raving Looney party. I am bereft.

Ours is a safe seat for the party I will never vote for. Nevertheless there's always the chance that UKIP will lose their deposit so all may not be lost.
Posted by Herbie Neil at 10:04 pm

Neil and Kath,
Responses to your points, lettered (as opposed to numbered) as per yours:
a) I don't know - haven't been watching her extremities;
b) I am unsure why someone hasn't punched him on the nose - surely his Secret Service bodyguards could let their guard down just for a moment. And I agree, he's no leader and yes, Angela Merkel is a much better bet
c) I am using the hot weather as an excuse not to paint - you have given me permission to wait it out.

Re the grandchildren becoming excellent helmsmen and lockwheelers - we are making use of ours in that way too. Isn't it lovely how the timing of their coming up and increasing strength is perfectly matched with our decline?

The Monster Raving Loonies are the most successful political party in the UK. When they were formed, in the 1960s, they had three main policies that they no doubt chose to establish their "looniness" as they were so obviously unachievable:

1. Pubs to be allowed to stay open all day.
2 Commercial radio to be legalised.
3. Votes at 18

They acheved them all without ever winning a seat!

Neil, I concur with everything you've said especially about the rain and your part in its fall (it's a guarantee that if I want to do anything, it will rain too), except maybe about Angela Merkel. We have a slightly different perspective of her here in NL.

But quite apart from that, I am tickled pink by Jim's comment :) Good on the Monster Raving Loonies!!

Lovely blog post. It made me think and it made me laugh. How fortunate you are to have all of your grand kids in Britain. I wish we did.

I am moored up on the online moorings at Napton Marina for a week to visit with friends who work here, and continue with the never ending work list for the boat. No sign writing yet so traveling in stealth mode. I do hope our bows meet somewhere this year for a cuppa and some cake or a glass of wine and some nibbles. I have only met one half of your dynamic duo. It is long overdue to meet you as well Neil.

Take good care of each other,

PS: Good for Grace! What a little trooper!

Blogging last on May 19th - been waiting with baited breath for this.
I also met up with Jaq Biggs last week and we achieved a great deal. Read about it in the Stronghold blog or hers. Now at Sutton Stop and only one guess as to where I've been and where I am going now. It will be very easy for you two!

Ah I knew my votes were not in vain

Marilyn, how can you not notice Mrs May's extremities? They are bizzare, as are those of Peter Crouch, the most ungainly good footballer ever.

Jaq, we'll keep looking out for you.

Ray, for some reason, the words Admiral and Greyhound spring to mind