We got lucky (just) going up Claydon locks on Tuesday.  Recently they’ve been closing them from 5pm until 9am or something like that, but it was only two o’clock so we were OK, or so we thought until a nice CRT man came into view carrying a ”Locks Closed” board ready to lock up Claydon bottom lock.  Apparently they decided on that very morning to reduce hours still further so that you can only pass through from 10 am until 2.30pm.  We were OK because we were half way up the flight so they let us through, but had we been half an hour later our two day out and back trip would have been stymied.  The nice man said that the reservoir that feeds that area was getting perilously low.  How long before a total stoppage we wonder?

The reason for our jaunt was to take Jacob and his girlfriend Abby for a short trip before they disappear back off to university.  Grace, who is keen as mustard about boating these days came along too.

Up on the summit pound the water levels were OK if pretty low at the edges, but we got to Fenny Compton without trouble.  Boats coming the other way were all unaware of the change in stoppage times, and CRT seemed to have failed to update their stoppage notifications, even next morning.  A bit naughty that.

The last time we went to the Wharf Inn at Fenny we were disappointed at the state of the beer, but this time it was very good, and their legendary gut busting pies were as gut busting as ever.  A real big  piece of pie with shortcrust pastry top bottom and sides and lots of meat inside.  Not exactly health food, but Proper.

We retired to the garden and Jacob and Grace decided to share a Cookie Monster dessert.  The menu says it’s enough for two, but it came with four spoons and no wonder! 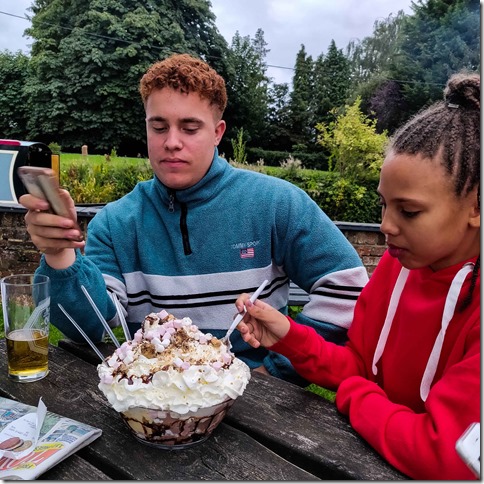 No, it’s not all squirty cream, that’s just the coating. It’s mainly cookie dough Ice cream and little marshmallows.  We all had a go at it and still only managed to eat about half of it.  I suppose the moral of the story is to go to eat at the wharf only if you are extremely hungry.

Grace is turning into a fine little boater.  On Wednesday morning with barely any instruction and largely silent supervision, she tightened the stern gland, started the engine, untied the boat, steered us gently past all the other moored boats up to the winding hole, turned the boat and brought her neatly into the side at the water point.  How about that for a ten year old!  Not only that she is always the first one to have a go at the lock paddles, refusing to give in when they are really tough as quite a few of them are.

Coming back down Claydon locks, the CRT plan was I suppose working as the compressed queue of boats did mean that it was one up, one down, so every emptying and filling had a boat in it.  Apparently there were fourteen boats queueing at the bottom at ten o’clock so the waits were long.  Half way down we were a bit taken aback to meet Leslie ( Ex Nb Yarwood) who we thought as off somewhere in a camper van having given up boating.  She and Joe were moving a boat for a friend.  She did assure us though that they had no thoughts of getting another boat for themselves, but it was good to see that they can enjoy a quick fix now and again.

Next week we’re off on out extended September cruise. I think our route has been decided for us by the stoppages, but that’s OK, we were sort of planning to go down onto the Thames anyway, so that’s what we’ll do.

Perhaps we'll see you on the Thames then!

Well done, Grace! What a little trooper! Enjoy the Thames, Neil and Kath. If you see Carol and George, I’d love a photo of you all :)

Hi Kath, We'll be at Beale Park tomorrow and then going slowly downstream eventually to Kingston by end of September, so not sure how far you'll get or if you'll catch up with us but if you keep in touch we perhaps sort something.

Recommended moorings ... presumably you're coming on at Dukes Cut and coming downstream ... not too familiar with moorings until ...

Iffley - good mooring with rings immediately before the pretty bridge/lock no charges. pub no good
Sandford meadow is good if there's a space but there are mooring on the end of the lock landing 24 free and pay per day after. pub good
Abingdon - now 3 days max no charge on the meadow/town moorings. Lock lay-by 24hour free then paid. good pubs
Days Lock/Dorchester - moorings after the lock on the left just past the river Thames little bridge. walk into Dorchester to see the abbey church/museum and pretty village
Wallingford £7 per day on either side or free if you can get a wild one after the bridge on the left. good pubs
North Stoke - just downstream on the left - check my blog for that one - difficult to describe exactly where it is - good walks into North/South/Little Stoke
Runsford Hole - on the right about half-mile above Cleeve lock
Goring
Beale Park
Pangbourne
If you need any more get in touch!
Happy cruising.

Thanks Carol, excellent info. We will probably turn back after we get to Reading SEP 13th