Whenever Herbie's paintwork starts to look shabby, I feel guilty. In my head I can hear the tutting of the kind friends who put in so much time and effort when we repainted her in 2010. The paint had got pretty flat lately and a sort of bloom had settled upon it. Washing made no difference and I feared that trying to polish it away might not be very successful. Desperate measures were called for so I decided to try it with T Cut.

T Cut, like WD40 and 3 in 1 Oil has been around forever but despite owning a few old bangers in my younger days, I've never used it. You probably know what it's like, but in case you don't, it looks suspiciously like Brasso.

I was scared it might take off too much paint or leave scouring marks. Narrowboat paint is a lot softer than car paint. Anyway after a short trial on the side hatch lid, I decide to risk it.

The first thing that struck me was how easy it was to rub on, you don't have to rub very hard. Then the bigger surprise was how little paint came off on the rag. I don't think I'm exaggerating by saying that my usual Craftmaster polish takes off as much pigment. However, the results were a delight. The bloom disappeared in a flash. Then, after the T Cut was rubbed on and then off I thought I'd have a go with a spray bottle of Bullet carnauba wax that I bought some years ago. I never had any success with it before, but now that the paint had a new surface it was worth a go, especially as I remember Adam saying it worked for him.

Well they say a picture is worth a thousand words, so here's the result. 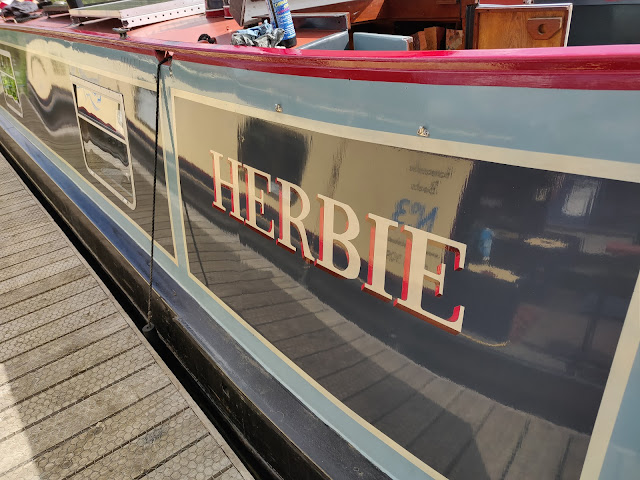 I a inspired to have a go, Neil. Looks wonderful!
Cheers, Marilyn