The latest CRT reservoir figures are out, so I thought I’d do a quick summary graph from their data.  The figures on the left indicate the percentage fullness of the reservoirs for each canal. 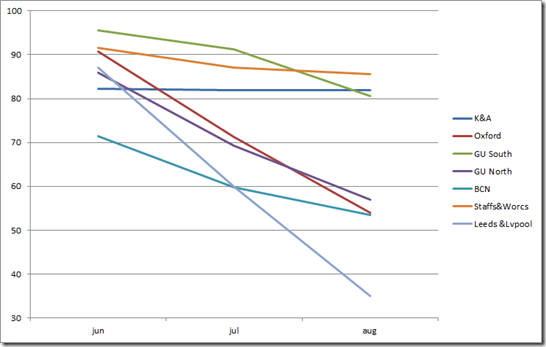 As you can see, I‘ve focussed on he southern half of the network, but added in the Leeds and Liverpool for comparison. The first thing to say is that things aren’t as bad as they were in 2011, because we started the season with reservoirs nearly full.  However it’s mostly heading fast in the wrong direction.  These figures always raise more questions than answers e.g why is the GU south doing so well?  Aah maybe it’s because like the K&A, the reservoirs are spring fed and therefore some weeks or months behind the others.  Strange also that the L&L is doing so badly.  Bill, a boater from up there who I met this week said that they didn’t have enough reservoirs up that way.  Could be.  On the Staffs and Worcs, I have no idea.

At the moment I’m most interested in the Oxford, being our home canal right now.  That’s getting worse at a more rapid rate than most, even though the reservoirs are still over half full.  I suspect that the volume of boat traffic might have a lot to do with it.  Well we’re still hoping to undertake our customary September cruise  Fingers crossed.

last September we feasted on blackberries every day, and I was fearing that this year they all might be dried up, but this evening I went out with Grace and within a couple of hundred yards from our house we gathered a big bowl of juicy ones.  That’s tonight’s pud sorted.

Bkackberries: it does depend on where you are. A week back on the GU we saw plenty but didnt stop as we did not have the right ingredients to go with them. Now on Leicester Line and we cannot find any, perhaps because we did stock up so we could do our favourite of bread and butter pud with blackberries.

It's my fault too on the Blackberry front. I bought a big bag of sugar to make some jam having seen masses of huge fat juicy ones on the Coventry. Now there are very few near Foxton, those there are are tiny and not worth the effort.
Pip