Funny old things boat names.  No matter how many boats we cruise past, I can never resist looking at their names. Maybe it's in case it's someone we know, but more often it's to perhaps give some idea of the people who chose its name.  We didn't choose Herbie's name, she came to us with it. Oven ready as some idiot might say,(oh now I'm getting depressed again).  Nevertheless we've got used to Herbie's name despite the odd remark about Volkswagens.  I always think it's a friendly cheery name anyhow although I get bit conflicted about calling Herbie a 'she'.

I've written before about good and not so good names.  Some are downright filthy (I won't even quote the worst and I imagine their owners must be creepy at least), some are yucky- how about Our Destiny? Some are witty like the lovely spoonerised Sailbad the Sinner, or  the naughty but fun  little Jolly Todger we used to see down the GU years ago .  Some are right for the boat and some are not, I mean a big old tug covered in rivets called Titan is good but it would hardly work on a plastic cruiser would it?  I like the tiny plastic cruiser down the Oxford simply called Yoghurt.  Then of course there's the lovely Bones owned by the lovely Bones just to confuse us. And as for all the Dreamcatchers and Narrow Escapes, well they're hardly original are they? And of course there's the quaintly named scruffy old CRT boat called Pride of Slough. And finally as I have said before if I had another boat I might call it AXE, so I could easily manage the sign writing.

All that said, we saw a boat this year with a new slant -  a name that raised a smile because it's super appropriate for the times we are living through.  It couldn't have been planned that way because it wasn't a new boat, but anyway here's a little Herbie Award for it. 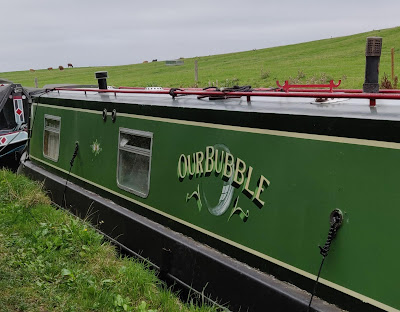 Anybody seen a Zoom this year or a Circuit Break?  They'd be good.