Best Canal Business 2020 Award plus some toys for boaters

So for our second Herbie Award winners announcement we decide on the Best Canal Business for 2020.  In this unique and troublesome year we considered the business who had solved problems for us in the most helpful and stress free way, and all things considered for sorting out the complete pig's ear we made of trying to transfer marinas in a sympathetic and trouble free way at virtually no notice:

When Castle Marinas took over ownership on Cropredy and Crick a year ago, we wondered if it would be a move for the better or the worse.  Well certainly for us it saved the day.  The help we have had from Cropredy, Wigrams Turn  and Kings Bromley has been friendly and supportive throughout the Covid cock up.  Thanks folks.

Now on to a bit of fun.  Usually we give an award for best gadget and of course the idea of a good gadget is that it should be useful for something.  Well folks, sometimes gadgets are allowed to be primarily for fun, so this year we've renamed in Best Boater's Toy.  You don't need any of these things but you might enjoy having them.  I certainly do anyway.

First off a low tech item.  In fact it is designed and sold as a sort of toy, albeit an educational one.  Typically we are not putting it to educational use but to perhaps raise a smile from other boaters.  Here it is. 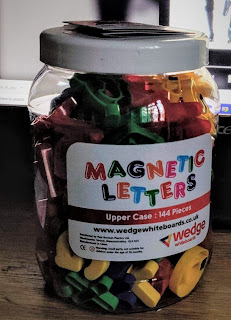 and here it is put to use. 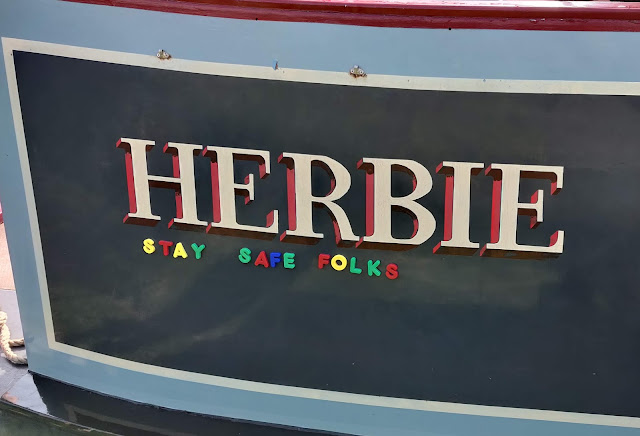 On our last trip we changed the message every day or two - anything from GRAND ONION CANAL' to ,on a very breezy day, ' BLOWIN IN THE WIND'.  The letters are just magnetic enough to stay put, but easy to move and not strong enough to scratch the paint, and here and there they did raised a smile or a laugh from passers by.  I really like 'em.

Next up, something marginally less frivolous.

The speed limit on English canals is supposed to be 4mph I believe.  Fat chance.  I suppose you could exceed it on a deep wide canal like bits of the Grand Union, but in most places you'd be hard put to even reach 3.5 mph.  So who needs a speedometer?  Nobody, but it is fun and interesting to have one and thanks to the wonders of GPS it's now easy to get.

First I made my own by coding an App for my Android phone. I called it SpeedO 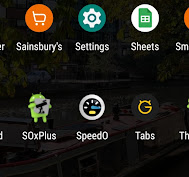 here it is in action.

Fear not, there are better things you can get either free or very cheaply on your smart phone.  Here's a good one.

This is an app called Pacer that I use for recording my exercise walks.  I have no doubt it will work in recording your boat's movements - it does have a cycling setting so it doesn't have to count steps.  It really does encourage me to keep up the exercise routine, especially as it passes the data on to the Google Fit app as you see here

You get a map showing where you've been, a breakdown of your speeds over different sections of the trip and lots of other stuff.  There are lots of apps like this whether you've got an Android phone or an iPhone.  After collecting this data for a while you could be more realistic about putting in your average speed into CanalPlan if you are planning a trip or trying to work out whether you will reach the pub in time. Or maybe you like to walk the towpath to keep fit.  This will help you set and keep targets, or you could even use it to produce a map of a walk to pass on to a friend. I use another one called Biker for cycling and that gives you instant readouts of your speed.

Do you really need this stuff? Well not really, but it's good for trying to keep up the exercise, and you can use it as a canal Speedo. I just think it's fun and interesting -a toy.

Is it more fun than magnetic letters?  Find out next time, when we'll also be looking at the most attractive stretch of canal from this year's cruises.