Yes it's here at last, the moment that both my readers have been waiting for,

"What will the categories be in this strangest of years?" I hear you ask.  Is there anything to award when so little time has been spent boating?  You bet there is.  We've cruised for 20 days, had jobs done on the boat, been to the pub, faced scary moments, entertained helpful crew and spent happy days is lovely places, so many of the old award categories are ripe for recognition.

Your fully sequined hosts (me and Kath) are on the rostrum and a pile of Golden Envelopes lie ready on the table, so sit back, break out the cheap prosecco and get ready to applaud the illustrious winners.

First up is that old favourite;  Best Pub by the canal.

Despite the cruel but probably necessary temporary closure of so many pubs this year and despite the shortness of our cruises we made efforts to support  publicans where we could.  So we have three nominees for Best Pub (actually they could also technically be nominated for worst pubs visited because they were the only three we managed to find open)

Sadly the Wharf at Fenny Compton was closed the last time we were there in July, but they were still open in March when old friend Rick joined us to help us on our way to Calcutt.  We warned Rick about the huge portion sizes they dish up at the Wharf and he was not disappointed.

Down at Napton, the brilliant landlord mark at the Folly had done a brilliant job of moving the business out into the garden with lots of spaced out seating and a number of marquees to shelter from any bad weather.

They had obviously put in loads of work to make the place safe and welcoming and I'm glad to say they were doing a roaring trade in the summer months.. The slightly shortened menu was still full of goodies and the excellent Shagweaver bitter was in tip top condition.

Lastly thanks to a lift from Rick and Marilyn we managed to get up to the Olive Bush at Flecknoe (about a mile from the canal) for their quiz night in March.  Although mainly frequented by locals, this small village pub is very welcoming and they do very good food and drink and an excellent quiz. The locals are full of fun and we always have a good night there.  It was during the week of panic buying in the shops and one local gent came into the bar concealing a toilet roll under his coat joking "Psst , anyone want to buy supplies".  Later, in September we saw signs along the canal saying that the Olive Bush was offering to deliver hot meals down to the canal.  Now that's what I call enterprising. 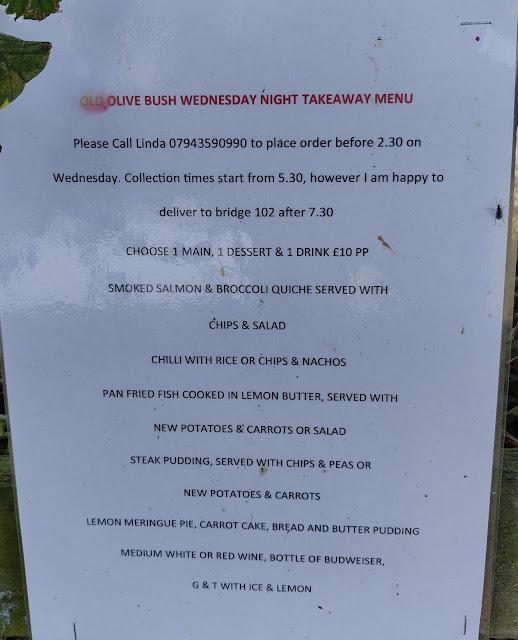 So only three to choose from but all worthy contenders.  Come back next time for the opening of the Golden Envelope to reveal the winner and to read about nominations for Best Canal Business and how they supported is in difficult times.