B*gg*r! I just discovered that we missed an opportunity when we went to the Blists Hill museum in Ironbridge recently. We saw the Shropshire canal, (not to be confused with the Shropshire Union canal) but failed to walk round the bend to see the inclined plane. I wrongly assumed it would now be no more than a grassy bank, but now find out that it still has the rails and various other bits intact, having been part restored in the 1980s. The inclined plane, opened in 1792 allowed 5 ton tub boats to be hauled up 207 feet from Coalport to Blists Hill. Oh well, we'll see it next time.

The bit of the canal in the museum lies alongside a short bit of railway track where a working replica of Trevithick's steam locomotive (the world's first) can be seen in steam. At least I got a picture of that. 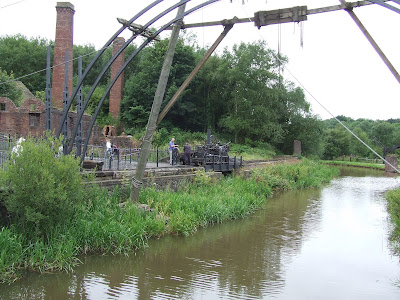 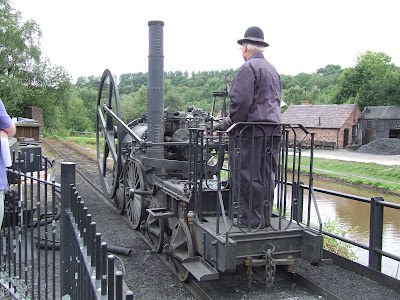 Its hard to imagine what people of the time made of this amazing contraption which had the power of several horses and had all manner of strange gubbinses attached. Notice the angle iron rails and how the wheels sit outside the upright bit.

While we were there, we were pleased to see references to our namesake. 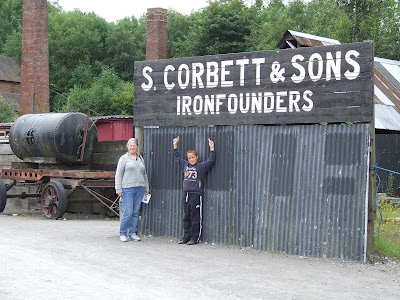 Perhaps the best bit of the museum for Jacob, was the opportunity to handle and spend pre- decimal money. I'd forgotten how big and heavy the coins were. Old money could be got from the on site bank, although for a new fiver you only got a couple of shillings worth of the old stuff. Still, it went quite a long way as sweets etc were offered at Victorian prices.
Posted by Neil Corbett at 4:43 pm

One thing to remember about 'old money' is that the coins were far more valuable than current ones. In those days, the smallest coin would actually *buy* something. In the days of Blists Hill, a ha'penny would buy a chocolate bar or a penny a newspaper.

Furthermore, the more I think about it, the more sense LSD made, as coins. The makeup of coins (1d, 3d, 6d, 1/-, etc) meant that you needed far few coins to make the right change, and carrying the coins was less confusing. And the weight didn't count for much. Compare the size and weight of a penny with the equivalent 50p to buy a chocolate bark for instance. And far fewer lost coins, because of the size anyway.