One of these days I'm going to compile a table of the relative ease of lock gates and paddle mechanisms on the Grand Union. There seems to be no correlation between size of balance beam or depth of gate and how heavy they are to push. They vary from dead easy to almost unmovable. If I had them recorded I would know which ones I could send a youngster forward to set up.

Mind you, some gates swing too easily so that they swing open by themselves when you want them shut. You could be running round a lock all day shutting first one side only to find that the opposite one has swung open. In the end you have to open a sluice at the other end to let the water slam it for you.

Uxbridge lock is a prime example. Only about four feet drop but the bottom gates are really hard and yet the top gates drift open at the slightest whiff when the lock is full.

Old but well greased paddle mechanisms can be a lot easier than new ones. Worst of all are the dreaded hydraulic mechanisms. Never too stiff but they take too many turns to wind up and are just as many, and as hard work, to drop. I like the old exposed mechanisms like this one we saw in Brum recently. 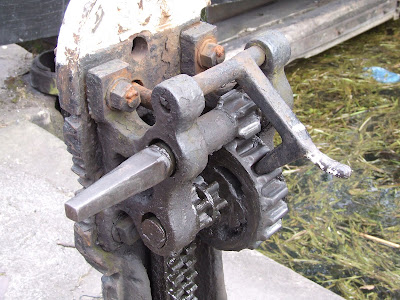 Plenty of places to trap your fingers in the exposed cogs, and the main gear shaft is obviously loose in its bearing but I bet it rattles up dead easily. I also like the grooves cut in the post by the horse ropes in the old days. Despite modern safety standards it would be a crime to replace this paddle mechnism while it still works.

Mind you its fun when you come across the odd super duper electric stuff like this one on the Lea navigation. Not that I'd want to see them everywhere. How would we keep fit? 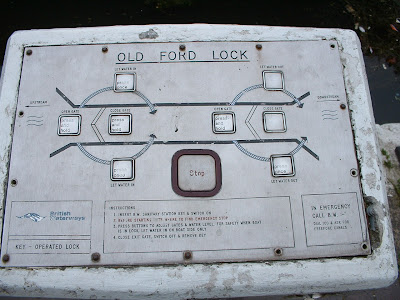