Seeing ourselves as others see us

We received our first Christmas card yesterday! Inside was a note asking how we were getting on with our "Long Boat". I've lost count of how many times I've had to gently explain that it's a narrow boat. I'd rather they called it a barge!

People are always curious about boaters. Quite often we get questioned by bystanders at locks. One Indian family up the Lee navigation were amazed that people could actually live on a boat. "You mean you sleep on it? Out here on the river? At night? Do you have a bed?" We gave them a guided tour and they were amazed. "Look, a toilet. Look, a cooker and a sink!" Kath is now getting quite good at guided tours of Herbie. Sometimes we give rides between locks and occasionally let them steer. I think BW should pay us PR money.

Then we get the questions about where the canal goes to, why they put in all these locks to slow us down, how much it costs to moor up overnight, etc etc. The one comment we nearly always get is "Oh it looks such a lovely relaxing way to travel". Well it can be, but I wouldn't exactly call a day working 15 Grand Union locks relaxing. Actually, I see it more as a way to keep fit!

A picture of me "relaxing" at Stonebridge Lock. My back still aches at the memory! 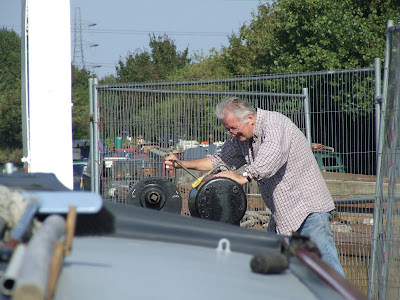 It really does seem though that a lot of people envy us in our "long boats and barges". And so they should.

It is rather nice being envied. Although I sometimes add "You could have one too if you work hard for thirty odd years and save up." Anyway, it's all a question of priorities. I expect they have newer cars and nicer houses than we do. Half of the cars on Top Gear cost as much or more than Herbie.
Posted by Neil Corbett at 3:03 pm

there is a Long boat pub in Birmingham on the canal and they were always known as long boats in Birmingham i think, so you can to some extent pick your phraseology, the boats are long and they are narrow