If the Slough Arm had a tunnel there might just be a chink of light at the end of it. This summer I paid a tenner to join the Friends of Slough Canal and the minutes of recent committee meetings bear interesting news.
First, the idea of linking the Slough Arm through the town and out to the Thames near Windsor.
Should this ever come about it a big deal indeed and would shave 30 miles and 21 locks off the journey to the upper Thames from the Grand Union. That's about two days cruising, plus up to a day waiting for the tide at Brentford.
I think it fairly unlikely myself but the news is that Slough Borough Council plan to set aside money for a further feasibility study next year. The prospect for the Slough Arm would be major improvement as I don't suppose it could then keep its (unique?) status as a remaindered waterway, and maybe then it would be properly dredged and kept more clear of weed.
I was amused to read that councillors in Windsor were not impressed by the promise of increased tourism, saying they had more than enough already!
The second bit of news is that Slough Basin will be included in the target area for Slough's regeneration. This seems a lot more likely and is very good news, as the basin is the major let down on the Arm. If it provided a good place for boats to visit, then the Arm would get a lot more use. At the moment it looks like this. 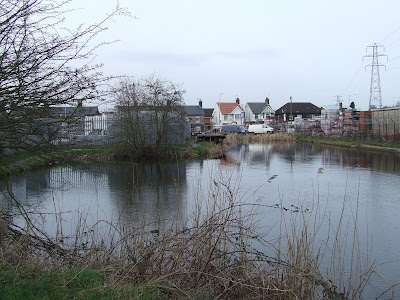 In a previous set of Friends minutes they recorded a discussion of this year's Slough Canal Festival, and a determination to make improvements next year. Amen to that. One or two of us from High Line Yachting, our moorings, would give it our support.
Here we are at the festival mooring in 2007 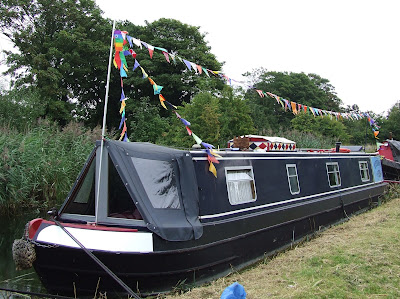 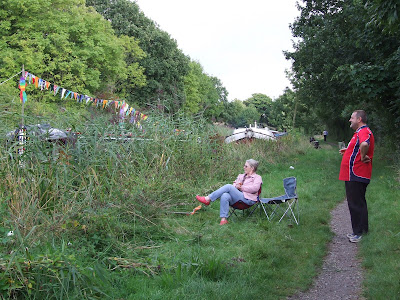 Notice the subtle difference?
*PS Do my eyes deceive me or is that Saltysplash with a glass of beer? Surely not!
Posted by Neil Corbett at 5:21 pm

That's great news. We'd add our support to the basin regeneration - I'm sure it will bring benefits to the town.
Sue, Indigo Dream

I don't know too much about this, but any regeneration sounds like good news to me...and yes, from what I've seen of Saltysplash's photos, that sure looks like him!