This time I tried it freehand - albeit with a strip of masking tape top and bottom to get clean top and bottom lines. Yes I know Herbie has an E on the end, and No Ididn't run out of space by mistake. I sacrificed the final E so that I could do larger letters. 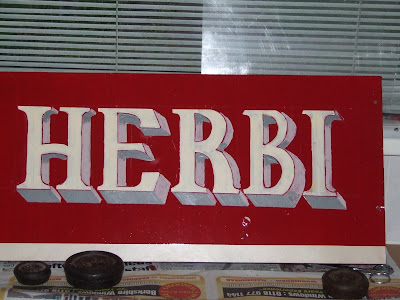 The paint I used was a bit of a disaster really which made it quite a bit harder. Hence the blotchy colour and the raggy edges because it was clogging and drying on the brush. I used some old emulsion for the main lettering because it was all I had in a creamy colour, and mixed up that with some pink and grey undercoat for the blocking. Remember his is only practice. The blocking paint was useless, a bit like trying to paint with polyfilla! For the dark shading I used some grey undercoat. All in all I reckon I could do a much nicer job with proper paint.
When I first started (on the H) I was convinced the whole thing was going to be a disaster and I was wondering how to get out of my promise to put a picture of it on the blog. But I kept going, and whilst the end result doesn't stand up to close scrutiny I'm not too ashamed of it. Think of it as a sketch. I think I put the letters a bit too close together which put me off making the blocking wide enough on the top half of the letters, so they all look base heavy.
Doing it freehand is not that hard if you use the brush decisively, and on the curved bits I found that if I started a bit inside the width and got the curve right, then I could extend it to full width afterwards. The first curve strokes were inevitably misjudged.
Thanks to those who suggested chalk for marking out. I'll have a go to see if it works next time.
I think that for attempt 3 I'll make sure I have some paint that flows. It's too hard to keep the brush in control and get clean edges otherwise.
I'd welcome any comments and advice.
Posted by Neil Corbett at 2:16 pm

Was there a reason you went for the blocking on the right rather than the left this time? I suspect that, particularly for the R and B, the blocking is easier on the left, as you've got smaller curves to cope with.

Well the reason was partly that I wanted to try it the other way round, and partly that I had copied the font from Lady Elgar which has the shading on the right.

However, your suspicions about the R and B are probably right. I hadn't thought of that. maybe that's where version 3 ought to go.

You could always try dipping your brush in some real turps or before you dip it in the paint. It might stay setter a little longer that way. I often do that.