A folding table for the cratch -designed by telephone

Rick and I have spent quite sometime talking on the phone this weekend about a design for a folding cratch table for Herbie. The boat has such a table at the moment built by Herbie's previous owner, but despite being ingenious it's too small and doesn't stow away and re-erect quickly enough. I can understand why because its a tricky problem.
The idea is to have a table hinged to the forward bulkhead. Swing the free edge up and out, engage a supporting leg and Bob's your uncle. Lift and click. Aah that life was so simple.
You see the problem is that the space into which the folded down table would hang is smaller than the table needs to be, and then the length of leg necessary to support the table level is longer than the space to fold it into.
So our table needs to have a folding flaps to tuck away when the table is dropped, and a telescopic leg. The biggest problem of all though is that it needs to be made by totally unskilled labour i.e. me.
I've done some drawings which demonstrate the problem and the proposed solution. 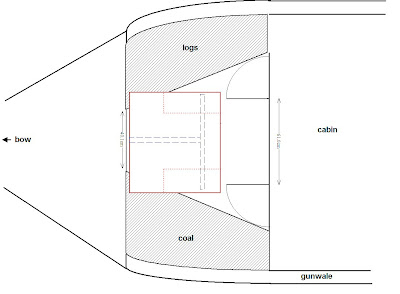 Here it is in plan view. The table is shown in red. The shaded areas marked coal and logs are knee high seat boxes. I've shown the doors (swung half open) into the main cabin of the boat. You can already see that the table overlaps the seats and so can't fold back to drop against the forward bulkhead. Notice the red dotted lines. These mark flaps which will fold in behind the table when it drops. The dotted T shaped thing is the supporting leg, which can be better seen in the side view picture below. 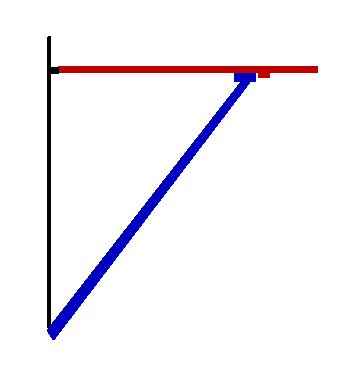 There is the leg in blue. It will be hinged to the bulkhead at the bottom, and must telescope up to fold away vertically when the table is dropped to the vertical storage position.

The final picture shows the view looking forward from the cabin into the cratch. 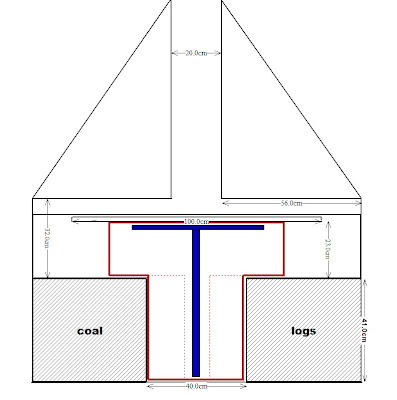 There is the table in red, hinged along its top edge. The flaps (dotted) are folded in to avoid the seat boxes, and the T shaped support leg is folded in behind the table.

The idea looks ok on paper. I have to figure out how best to make a telescoping leg and attach it to the floor, and how to give adequate support to the folding flaps. Rick suggests some sliding bolts at the top(as seen here) end of each flap. Then the T of the leg should support the outer end.

I can make the leg out of two bits of aluminium box section tube, one sliding inside the other with holes and pins to lock in at the shorter and extended lengths (like extending tent poles). Not sure how I would fix the T bar to the top of the leg though.

Anyway there it is. I hope to have a go at it when our conservatory (my workshop) gets above freezing. Any comments or suggestions most welcome.

Could you put a hidge hal way down the blue leg like on a paste table so you can fold it up.
I also managed to "Buy" a leg from a caravan outlet, but cant remember if its hinged.

Yikes, my ind is boggling just at the thought of it. I wish you all the very best with this Neil. Even with the plans, I can't visualise it, but will look forward to seeing developments as and when the weather gods allow.

How about having a clear perspex table that is hinged, but stored upright against the glass/perspex front windows instead of down below? Then it can be any shape that suits, lowered when needed and won't need extra flaps. The supporting leg can be a simple wedge, hinged vertically against the front part of the metal bulkhead, and pushed sideways against the bulkhead when not needed. From my own experience of a cratch table, no T-bar was needed, just a 'stop' section on the underside of the table to secure the wedge in place. Again, this could be perspex?
(anonymous contribution in case you think I'm an idiot!) x

Nicely done. Thanks for the idea.