Inspired by Henry V's tactics to defend against French knights at Agincourt, our son Richard has found a solution to deterring the swans which prevented him getting off his boat. The swans had set up camp on the little spit of land that leads to Richard's boat, and last year he had to fend them off daily with a broom handle in order to go out to work!
So when the pair of birds arrived again this year, something had to be done. Whilst the swans were out feeding Richard resorted to military style defences. Wooden stakes.
Here they are. Kath looks pensively on while Richard stands defiant: 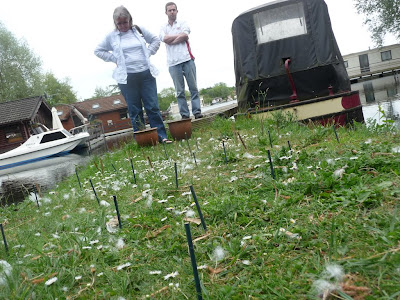 So far they seem to have worked, and the swans are reportedly a bit miffed, although the stakes do make it a bit difficult for humans too.
Posted by Neil Corbett at 9:45 am

Great to see history having such a practical application! I hope the swans get the message, as I wouldn't like to have to negotiate those myself after dark and with a beer or two under the belt!