A grandstand seat for the traffic jam at Little Venice 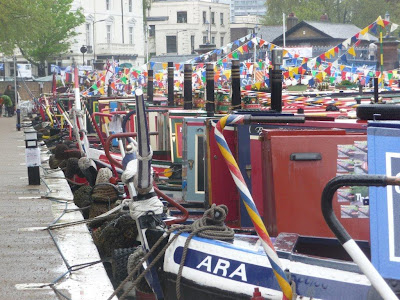 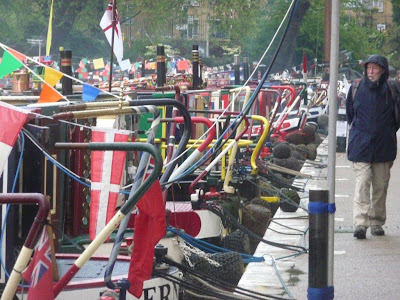 Monday was the best day of the Little Venice Cavalcade, if only for the wonderful boat traffic jams.

Rising late, we were only just up when a knock on the boat side heralded a visit by Amy and James of Lucky Duck on a day visit from Cambridge. Tea and much chat about solar panels and the like, then we were joined by Simon. More tea, then off all together to see the sights of the festival.
Simon's wee boat Tortoise was the perfect grandstand seat to watch the parade of historic boats led of course by President. With all the big boats moored in Browning's pool, manoeuvring space was very tight and when the Jason's Trip boat and the Waterbus arrived simultaneously, just as the biggest boats were in the tightest spot round the back of the island it all became rather hilarious. People standing at tillers near large loud engines don't ever hear what other boaters are telling them to do and there seemed to be quite a bit of good humoured misunderstanding.
Poor little Tortoise was right in the firing line at the edge of the back way round the island and it was somewhat alarming sitting on her foredeck as the huge iron clad hulk of Victoria came within inches of crushing her forever! Most impressive were the amazing skills of the guys aboard fuel boats Archimedes and Ara who seem to be able to put this big boats (one towing the other) just where they like.
The weather it has to be said, was rotten. Often wet and mostly very cold. It was nice later on to return to the warmth of Herbie's stove before we set off towards home, pausing for the night at the Black Horse. Herbie seems not to know how to get past the Black Horse without stopping.
Then today, sunshine all the way home. Typical. 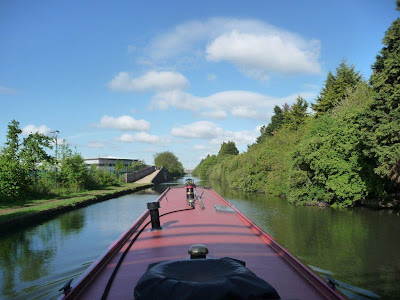 Finally, we paused at the one of the narrow little aqeueducts in the Slough Arm and gave Herbie a wash. How sad is that? Most unlike us anyway.
Posted by Neil Corbett at 2:36 pm

Marvellous photos Neil! Really evocative of the scene and liveliness.