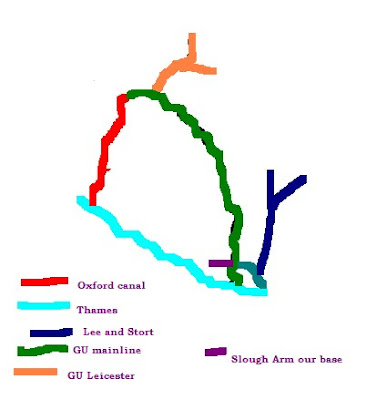 Sometime soon, early June probably, we'll head off on a longish cruise, three or four weeks probably. We might go North and explore the Leicester arm of the GU. Market Harborough appeals. Or perhaps through London and up the Lee navigation to the Ware festival and maybe detour up the Stort again. Or maybe up the Thames where we have never boated beyond Weybridge. If we go up the Thames we could go all the way to Lechlade. That would be nice, I love the upper reaches. We used to go camping there when the kids were little. Or we could turn off up the Oxford canal and then complete the Thames ring by heading home down the GU.
Nice to have the choice you say, but we always find these decisions difficult. We could be practical and write up the pros and cons e.g.
Thames
Pros - very pretty, never done it before, no work at the locks, lots to see
Cons - prone to dangerous conditions after a lot of rain, licence cost, no locks to self operate, pressure on overnight moorings, tupperware cruisers everywhere
GU to Leicester -
Pros - Know the best places to stop on the way up, mostly attractive, a chance to do narrow locks on the Leicester arm including two staircases, breaking new ground at the top end
Cons - hard graft much of the way, done most of it lots of times,
and so on.
I'm not sure being analytical helps really. In the end it's a gut feeling that wins out, unless we have a lot of rain making the rivers difficult.
Or we could do the whole lot. Up the GU to Leicester, back down to Braunston and down the Oxford to the Thames and down the mighty river to Brentford and then back to base. Hmmm where's that calendar. According to Canalplan that would be Thames ring ( three weeks plus at our pace) plus ten days for the Leicester/ Market Harborough detour.
In the meantime there is work to be done. An engine service which I aim to do tomorrow and sorting out our domestic batteries which aren't holding charge like they should. I'll do a hydrometer test to see if it's one battery duff or if all three need replacing.
And - there is the cratch table to finish. I have had some design problems with the leg to overcome. More of that in a fresh post soon.
It's all go when you are retired!
Posted by Neil Corbett at 9:32 am

I've come down the Thames from Oxford twice, and it was great - I'd love to explore above Oxford too, but it hasn't happened yet. One day. I'm making such slow progress up the GU you'll probably catch up. Not sure where I'm going, either, but I'm quite enjoying that at the moment... ;-)

Wish I was retired. It sounds just what I'd like!

just let me know cause im loving your blog and would love to spot herbie in his new colours out on a canal near me..

Go on, do the Thames to Lechlade - it's fabulous. You never know, it might NOT rain :-D

Why not take a few extra days and do the Leicester Ring and Thames ring(heading east with the flow) as well.
The leicester summit is my all time favourite stretch of canal. complete isolation