Kath was quite nervous about accepting Sue and Richard's offer of a ride on the tideway cruise to the Royal Docks.  All that wide deep water, VHF radio, big ships etc is a bit scary on a little narrowboat.  Landlubbers often gasp when we say we have a 50ft boat, thinking it sounds big, but I can tell you that on the tideway a 50 or 60 foot boat seems tiny.

Coming out of Bow Creek is the daunting bit, especially when you see a Trinity House lightship there!  Note Kath's anxious demeanour. 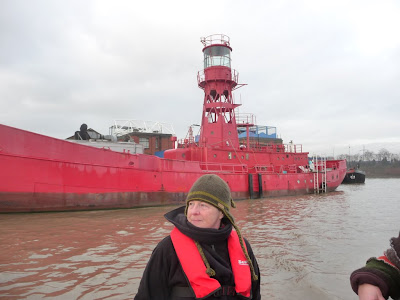 Then after a mad dash for the far bank the last thing one wants to see is a Thames Clipper taking off from the O2 pier.  Imagine a 220 seater twin engined boat 120 feet long, called Hurricane or Typhoon, coming past you at 28 knots and you get the picture.  The wash they make is prodigious and they seem to make not the slightest allowance for the plight of nearby narrowboats designed for calmer waters. 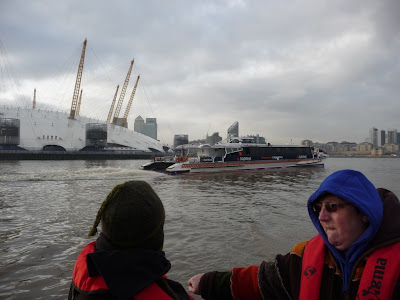 Sue bites her lip whilst preparing to spin Indigo Dream to meet the wash at right angles rather than straight on.

Luckily the Clippers don't often go beyond the O2 so once we had survived that one all was calm and smiles. 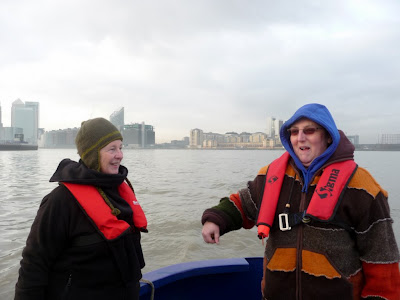 and anyway, we had two fine lookouts working for us:  Meet Lynx and Lou 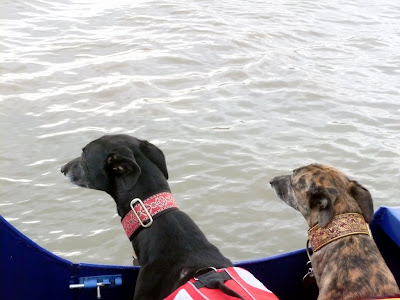 Should you ever contemplate a Thames tideway cruise, I reckon the trip eastward to the Royal Docks is a probably lot safer than the upstream trip from Limehouse to Brentford.  Even Kath became very relaxed about the whole thing. On the city centre journey they have clippers and other trip boats all over the place and the river is not so wide.  The riskiest bit out east is dodging the pair of Woolwich Ferry boats as they criss cross the river every few minutes.  I wouldn't want to be hit by one of them I admit.

As to the Royal Docks themselves, they were nothing like I imagined.  Apart from being really really really HUGE, and the water over 30 feet deep, they are not at all overpowering as the dock walls are surprisingly low to the water.  At the finish, we stepped off the boats just like you would onto a low towpath.  I had expected it to be a climb up a long ladder.

It's a pity we are moving Herbie up North soon, otherwise I reckon we would be tempted to join a St Pancras Cruising Club flotilla at the next opportunity.  However, I suspect we'll be back down south in a few years so maybe we'll do it then.
Posted by Neil Corbett at 6:02 pm

It all sounds very exciting! I must admit though - I have never handled anything bigger than a 12 foot Vercherres rowboat, or a keelless canoe. I am facinated by the narrow boats and british canals though. Both have quite a history. ATB!

Quite an adventure and a suitable marking of your birthday, Neil ;-)
When are thinking of heading off from your mooring? I'm very close at the moment and wouldn't want to miss waving hello!
Carrie