And the Best Canal Village Shop is . . .

I really should decide on who to choose as the winner from a short list before I go to bed.  I must have lost at least couple of hours sleep last night mulling it over.  In the end, I found the solution was easy – I just asked Kath.  She approved of the shortlist of Weedon Bec, Napton and Kirtlington, but came instantly to a firm decision, and I have to say she is probably right, so:

Don’t just go there to get something you need, go there anyway, you’re bound to find something to treat yourself with, and don’t forget its a Post Office and a tea room too – and it’s only a few minutes stroll from the canal.  I think we’re unlikely now to ever pass through Napton locks without a quick walk up the lane to see what’s in store.

And now for something completely different, although an award category we’ve had several times in the past. Best Gadget.

I suppose by gadget we mean an object we use on the boat and we find useful either to make a job easier, or to make our time more pleasant.  This year I can think of three quite different things that I have enjoyed using. Let’s have a look at our nominations.

What a little beauty.  I used it on Herbie’s roof before repainting both for sanding down rusty spots, but also to gently flatten off large areas before repainting.  It’s small but not silly small, very comfortable to use one-handed and it performs really well. The pointy iron shape lets you get at quite small areas.  The little dust catcher on the back really works and is a lot better than the fabric bags on previous models.I see they are now a penny short of £20, although I seem to recall paying rather less when I bought mine, but even at £2 I would still recommend it. The only gripe I had is that the replacement sanding sheets don’t have the extraction holes in the right place, so you have to hand cut them, but that’s easy. If I lost or broke it I would buy another. I’m going to use it on our well deck seats next. 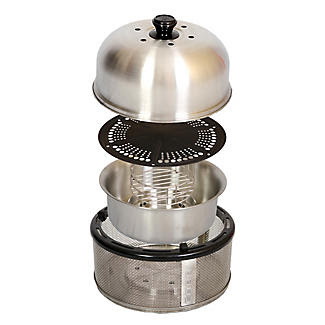 Well I told you the nominees were all quite different.  We’ve had our Cobb for many years and it has lasted really well and this year it gave us some good meals.  That’s because it is very well made and uses quality materials. It cooks, meat and veg, potatoes, gravy. . .  Grill stuff goes on the cooking plate and you can put veggies in the groove in the stainless steel bowlaround the heat source with a splash of water or wine.  Miraculously the outer case stays cold and you can pick it up with bare hands and carry it around when it is at full heat.  You wont burn your hands or the grass you stand it on – it would even be safe to use on your deck board as long as there is enough open air to make sure you don’t get Carbon Monoxided.  (It is strictly an outdoors-only device.) The only thing is don’t think of it as a barbecue, the Cobb cooks slower and more thoroughly. Think of it more as an oven. It is much less messy than a BBQ and is easy to clean and packs up nicely.  You can use charcoal as fuel, but we use their “Cobblestones” which are thick discs of compressed fibre which are a bit of a pig to get lit, but then burn very steadily for ages.  Here’s a photo of ours after we’ve cooked and eaten and removed the plate and lid. You can see where the meat fat has collected in the bowl, it made some yummy roast spuds. 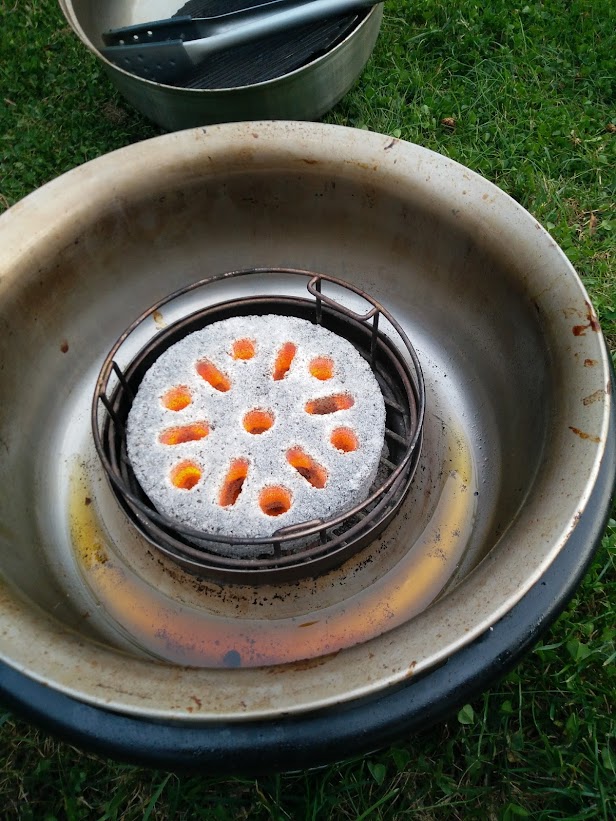 Cobbs are not cheap.  One will set you back about £100, but they should last forever.

and now for something else completely different

Over the eleven years we have had Herbie, we have hardly ever used our Eberspacher heater because we like the cosiness produced by the wood burning stove.  The Eberspacher heats three radiators plus the hot water tank which is nice but it does take a while to warm everything up, by which time we could have lit the stove.  So when one day the Eberspacher refused to start, we made a mental note to get it fixed but did nothing about it for a couple of years.  This year, we thought we should get it sorted, so on the recommendation of Adam and others we took Herbie down to Heyford Fields Marina where the wonderful  Dave of Boating Leisure Services fixed it in a trice and at our request fitted a timer switch.  Well what a difference that switch has made.  Being able to set it to come on an hour before we get up has made all the difference.  Having the chill off the boat in the morning and getting up to ready made hot water is a treat.  Then of course we switch it off and light the fire, but it has already done its job.  I can see that this small addition is going to mean we use our Eber a lot more in future.

So there you have it.  Three gadgets that we have enjoyed having and using this year.  Which one shall we give the award to? I’ll need to consult the head judge. Answers next time.

I discovered the Cobb this past summer. I love it and while it was a bit pricey it will out last me no doubt. A really brilliant piece of kit, this. Have you ever heard of a Remoska electric cooker? Friends have one on their boat and one at home and swear by them. It is essentially an oven that uses only 400 watts of electricity.

Now I have an Ebi and the switch thingy you showed but I have no idea how to use it. Les barely used the Ebi and that in part is why ours had to be replaced at great expense in February of 2015. We were told by the engineer who fitted the new one that they must be used at least once a month to keep them in working condition--summer and winter. I use it faithfully in these cold evenings before bed because I damp down the coal fire to tick over over night. It means the boat is slower to lose evening heat and I don't wake up frozen. Now if I could figure out how to use the timer thingy I might switch to using it first thing in the morning until the fire comes back up. In hot weather I turn it on for 20 minutes early in the morning once a month.

Ah, I see who got yesterday’s prize! Well done Napton!