Hmm I almost wish I hadn’t mentioned Marks and Spencer in my last post about meal deals because Paula and Carol (bless them) chipped in with Waitrose and Tesco just to confuse things.  Well on considering it, I concluded that getting a bargain meal when you are out boating is all the same whether you get it served in a pub or whack it in the oven on the boat.  However I can’t include Tesco or Waitrose, ‘cos we haven’t had any of their meal deal specials apart from the sandwich/crisps/drink thingy.  So originally I thought i would probably give the prize to the navigation for their two steaks and wine for £20, but as M&S are right next to the canal in Banbury, and you get a very nice  meal for two plus wine for a tenner I think I will surprise myself by giving

The Herbie Award for Best Meal Deal (while out boating)

Well that was a surprise to me at least!  I wonder who puts the answers in the Golden Envelope?

Now then, in previous years we’ve made awards for BCOSEB (usually won by Sue and Richard), so we’ll carry on the tradition of including the category.  I mean of course Best Cruise on Someone Else’s Boat.  Sadly we were unable to join S&R for an adventure this year, although I recall we might have been invited.  So what have we got? (in chronological order)

1. Ludham to Salhouse Broad (Norfolk) on, um, Hazlenut or Walnut or Jaylene (we’ve hired sailing half deckers from Martham for so many years I lose track).  This was our annual bash on the Broads with “very old friends” (in all senses of the phrase these days).  This year we chose new routes to sail and revisited Salhouse Broad, where I haven’t been since the early 1970s.  It was nice to see the spot where I fell in off the Wherry Albion and the place in Horning where we sank the dinghy by overloading it on the way back from the pub in the dark all those years ago.  Happy days.  Trips down the tidal Thames with Sue and Richard can be pretty hairy, but they should try sailing down the Bure on a Sunday afternoon.  It’s a bit like zig zagging up the wrong side of the M6 in a pedal car.  Kath usually finds an excuse not to join us on those days, something about needing one of us to stay alive for the grandchildren.  Anyhow I enjoyed it very much. 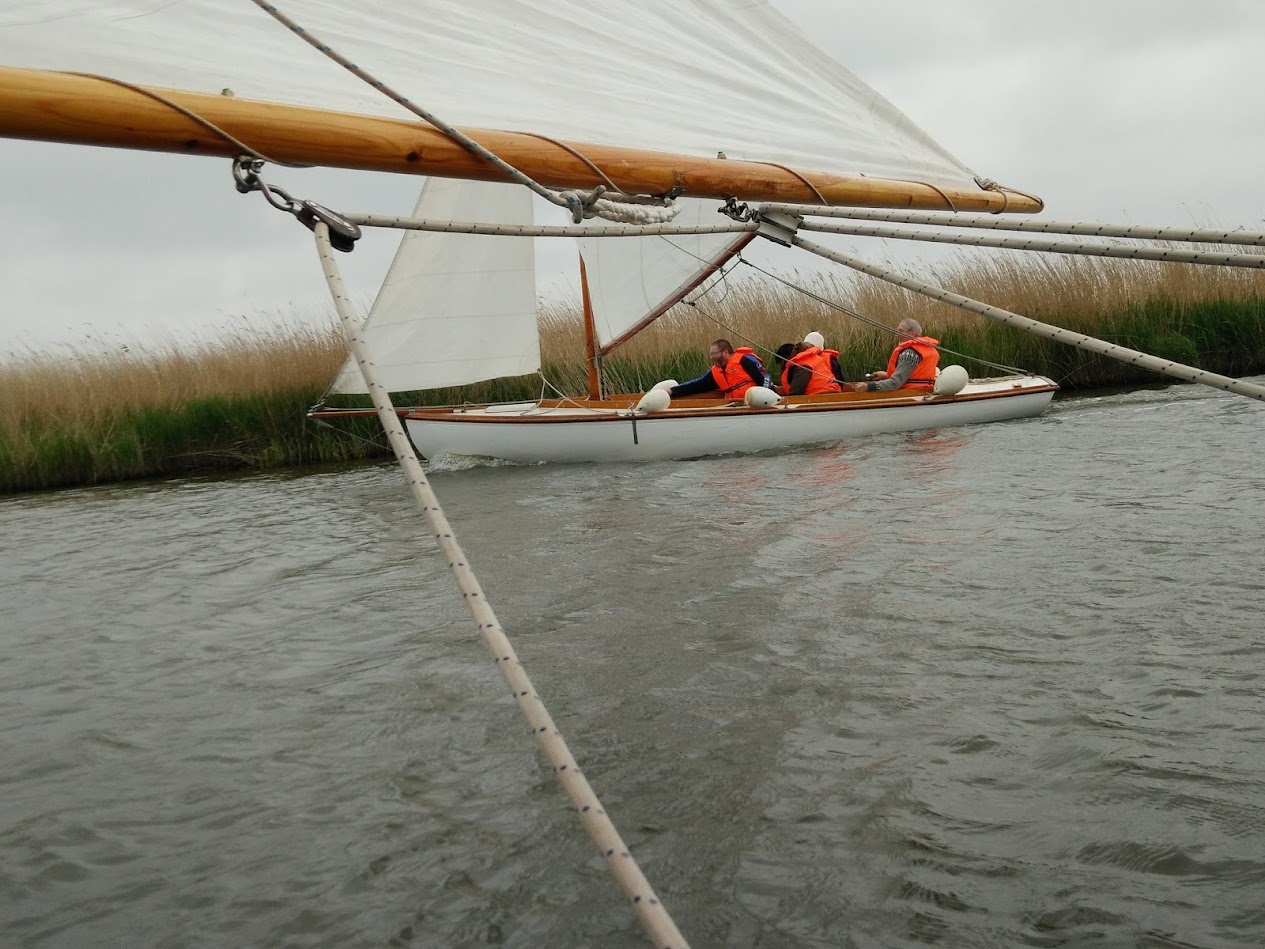 Here we look across at Rick and family,no doubt trying some underhand trick to overtake our boat, not that he’s competitive or anything.  Anyway we beat him that day, possible because I didn’t take the helm.

2. Thrupp to Jericho on Nb Bones

Yes, I know I’m honoured. Bones had a poorly leg and needed to get to Oxford to join us and the Moomins for what turned out to be a fab barbecue in the park, so I hopped back from Oxford on the bus and gave her a hand.  It’s always nice having a go on someone else’s boat and I must say her old BMC 1.5 runs sweet as a nut, or at least I did when I drove it, I think she’s had some trouble with it since (Ooo err, it wasn’t me wot broke it – honest).  Bones, as many of you know, is always good company and we had a pleasant run all the way down to moor up right next to Herbie.  Lovely.

Nb Bankside is the boat and the home of our eldest son Richard, who after not moving it an inch in many years, needed to take his embarrassingly rusty barque to Earith to be painted.  I was filled with trepidation, because the engine hadn’t been started for years and the diesel in the tank was at least ten years old.  What were the chances of that getting anywhere in one piece?  We brought Rick along with us as guest engineer, being fairly certain his skills would be called upon as we drifted helplessly in the current and disappeared over some weir.  Astonishingly after routine replacement of the knackered starter battery, the boat made it without so much as a hiccup.  I was furious – Richard didn’t deserve to be that lucky after neglecting the boat like that!  Afterwards we realised that he was saved from the dreaded diesel, bug by the fact that the stuff in his tank was so old, it was before they started adding biofuels to it.  Aah the good old days when diesel was diesel.

That part of the Ouse is very beautiful and the sun shone for us, so it was all extremely pleasant apart from the bits at locks where  Rick and I had to pretend that this scruffy old boat was nothing to do with us.  Is there a finer sight in all the waterways than St Ives bridge on a sunny day? 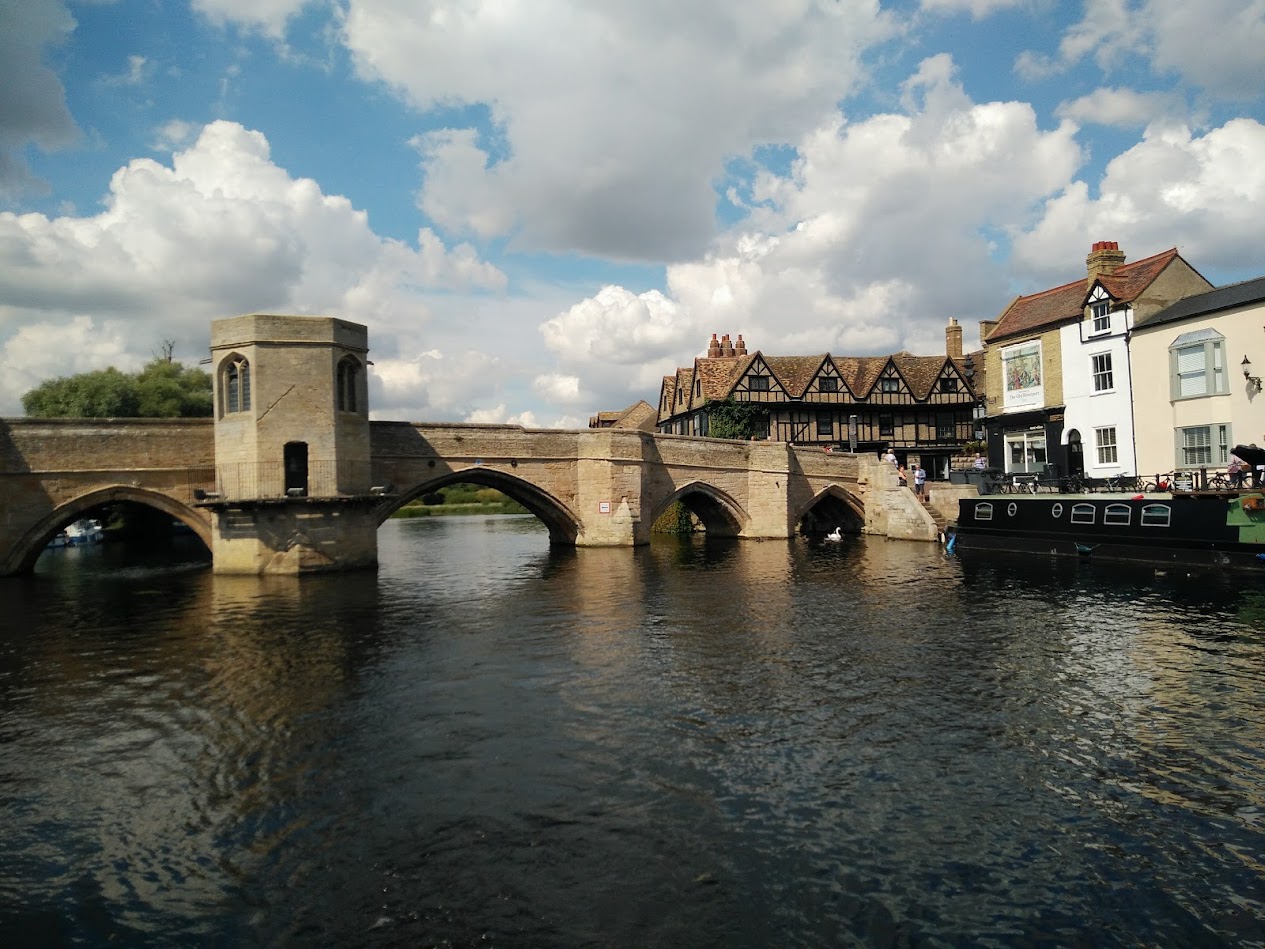 Well that was three good Cruises wasn’t it?  I’m a lucky fella.  Another sleepless night lies ahead while I wonder what lies in the Golden Envelope.  Don’t go away.

And we all await with bated breath!

I feel we've let you down terribly this year - must do better in 2018!

Oh no Sue, I feel it's the other way round in that we have declined one or two of your generous offers.