So much has happened since I last posted, I’ll have to do two or three separate posts to catch up.
The new stove. Well, its in and working, but it wasn’t all that straightforward. We needed a new collar on the roof because the old one broke when the old flue was removed, then the bolt holes weren’t in the same place etc etc. Anyway we now have new stove, new flue, new collar and I have painted the old chimney so it feels like we have the full set. We also have a lot less money :-( The old stove, when it came out, was in pretty poor shape so it had to be done.
People who have solid fuel stoves will know that they take a bit of skill to operate. Although our new one is the same make and model as the old one, the makers have modified the air controls so we have to learn all over again to get it right. When first lighting a new stove you’re supposed to treat it gently and only have a small fire, which is hard because small fires don’t stay alight very well, so the first night we had a short unsuccessful burn and then retired to the warmth of the Bottle and Glass where Saltysplash and Nora had their arms twisted (not very hard) via the wonders of Texting to join us for a meal. Salty was basking in the glow of satisfaction in making good progress on converting his boatman’s cabin ready for when baby peanut arrives in July. Returning later to a cold boat it was hot water bottles and bed. (We do have an eberspacher diesel heater driving three radiators, which we put on for a short while, but its not nearly so effective as a solid fuel stove.)
Next day we moved on down here to Hanwell, more of which in another post soon. We lit the stove again with more fuel this time and it started to get nice and hot. This is when the other feature of new stoves kicked in. As the paint and the sealants cure in the heat, you get smoke and fumes in the room. Quite a lot of it! Well, the users manual did warn us. Smoke alarms were set off, doors were flung open and we let the fire died while we repaired to the Fox for a couple of pints with Simon (Nb Tortoise) who we had persuaded to cycle up from Brentford to join us. Yet another good evening with a fellow boat blogger and High Line moorer.
Interestingly, the Fox is ten times further from the canal that the Bottle and Glass is. However as the distance from the door of the B&G to our moored boat was 15 paces you can see the Fox is pretty handy too.
Today we stayed put and lit the fire in the afternoon with all the doors and hatches open. I seem to have got the hang of the airwash control which seems particularly good at controlling the burn rate of logs. I think most of the fumes have gone now and the boat is at last getting warm. No excuse to go to the pub tonight.

More tomorrow of a great walk we did today. Meanwhile here's a picture of us moored up in the sunset near the Fox. 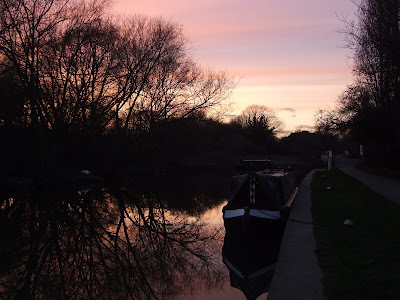 looks idyllic....glad the stove is working out well.

Gorgeous photo Neil. Is this courtesy of the Lumix TZ4? I'm thinking of getting one myself, so would love to know what you think.

yes, the TZ4 on its night setting. So far I'm very please with it. My friend Rick also has one now and is also happy with his