Riders in the Storm 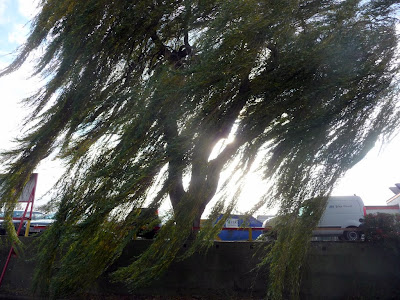 Winds gusting to 50 miles per hour. Only a nutter would go boating in conditions like that. So we did. It was on Saturday morning that we set off and things didn't seem too bad , for the first 150 yards anyway, then we came alongside the gap in the trees opposite the boatyard workshop. In a matter of a couple of seconds the wind neatly parked us 25 feet sideways onto the bank in a covenient gap between moored boats. When the wind catches your boat like that it seems there's nothing you can do.
Getting out of the spot was a lot more difficult than getting in it, but as luck would have it Geoff aka Saltysplash was nearby, looking over his new boat Amy (still on the concrete standing). He stepped out of Amy carrying baby Lilly and the wind slammed the door shut behind him, locking him out! Now we were all in a fix. Luckily Laura then appeared with Amy's keys and took Lilly back inside while Geoff gave us a hand shoving Herbie back into the middle lane and off we went. 150 yards done and only about ten more miles to go.
It sure was windy, but the Slough Arm runs in a sheltered cutting, then the GU and Paddington Arm are wide enough to allow for a bit of sideways drift and tree lined for the most part, so we arrived at the Black Horse without further drama.
Returning home today it was nearly as windy and as we approached the boatyard workshops again we were nervous. Should we break the rules and speed past the gap or go gently and risk being pushed sideways into the "For Sale" boats? We sped. However it probably was unnecessary because the wind had changed direction.
The moral to the story - go for it. Don't let the met office put you off or you'll never go anywhere. We had a lovely weekend. Sunday lunch at the Black Horse was huge - too big to face up to a pud, so we returned in the evening and had sticky toffee pudding.

Shush - I persuaded Richard to stay at home to do some diy on the back of that dreadful weather. Now I'll have to find some other wifely wile to get the decorating done :-)
Sue, Indigo Dream

Oh, and after our conversation about paint and paintbrushes I went and bought a Purdy brush - it's fantastic - you can't beat good tools.

Bit of a shocker when I found out how much the brushes cost but I reckoned it was worth every penny when Richard complemented the finish I got on the windowsills!

Glad to be of service! I met a professional decorator who swears by Purdy brushes.