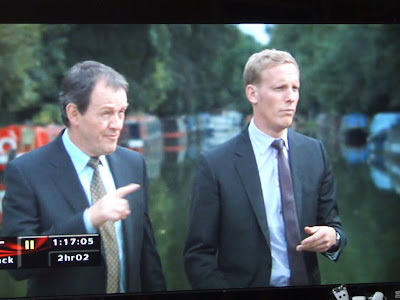 Inspector Lewis and Sgt Hathaway walk by the canal as they so often do. Where are they this time? Not in Oxford that's for sure, although that's where they are supposed to be. 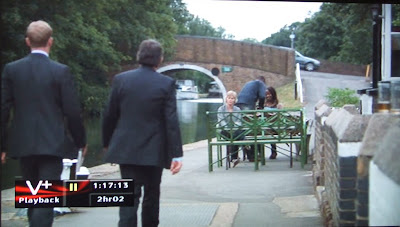 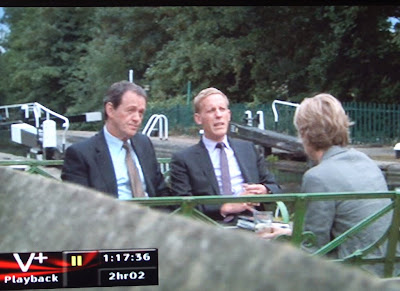 Kath and I both sat up and said "I know that! Cowley lock." Not the Oxford Cowley but the one on the GU just south of Uxbridge and the nearest lock to our moorings, so one we know very well. In this scene our heroes sit outside the little lockside cafe where we treated our weary painters to all day breakfasts on our final day in the wet dock just a short walk away.
Before I retired, I worked in a building which housed a disused County Court suite, protected from dismantling by English Heritage listed status. It was a lovely old place, oak panelled, complete with judge's bench, jury stand, witness box and the accused's box with stairs leading down to the cells below. Occasionally, over a sandwich lunch I would sneak in there with a friend and I would sit in the judges chair shouting "Send him down" to my colleague who would stand in the dock. To raise cash, the council used to rent it out as a film location and we've spotted it in many's the TV drama. The film crew catering van used to park beneath my office window and I had to suffer the taunting aroma of bacon sandwiches all day.
The strange thing is that when the scene cut to the street outside the court it was invariably somewhere totally different. Not even in the same town!
Posted by Neil Corbett at 10:21 am

Ha, yes, Neil, that is the way it goes with films. It's all the art of deception ;-) My ex was in the film industry, so I was used to having these thing pointed out to me on a regular basis. Who says cameras don't lie? They are active accessories to the fact even if they don't do it themselves;-)

Lewis certainly gets about - they were filming further up the GU last year - what's wrong with the Oxford Canal I wonder????

ha, yes, spotted that too. I remember a sign being up saying they were going to film, but I'm sure that was more than a year ago. I know they work a long way in advance, but that's just silly...