Have you got it yet?

In particular he is someone who doesn’t just complain about rubbish along the towpath but gets out there and clears it up.  Loads of it.  And that is what inspired us to give

The 2012 Herbie Special Award for Caring Enough to Do Something 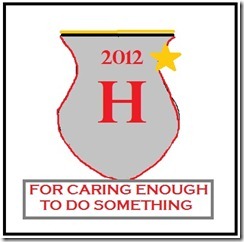 Well now there is a surprise lil ol’ me winning a Herbie.

I would like to thank every body who was to f*****g lazy to put their rubbish in the right place without those morons this would not have been possible.

I would also like to thank all those conscientious boaters out there who are going to make a point of picking up as much rubbish as possible in the next 12 months.

I have not been out 2 months yet this winter and I have collected 64 bags + plus a number of tyres and a 110ah battery. Lets all make a big effort. Thank you!

Hurrah! Hurrah - a worthy winner. Now please let me get out of these heels!

My choice too! Well done Maffi!

My choice too - funny that, as you didn't mention any names. Well deserved Maffi.