Well no-one posted a correct full answer to Question 7 although a few thought they knew it.  The car in the tree was a Reliant as most people knew, and it wouldn’t rust because it has a fibreglass body (and a galvanised steel chassis). But as Roy thought, all the newspaper articles got it wrong.  It is not a Reliant Robin.  The front is too square for that.  Nor is it a Reliant Kitten which was a four wheeler.  I didn’t know what it was, but a couple of minutes on the web sorted it. 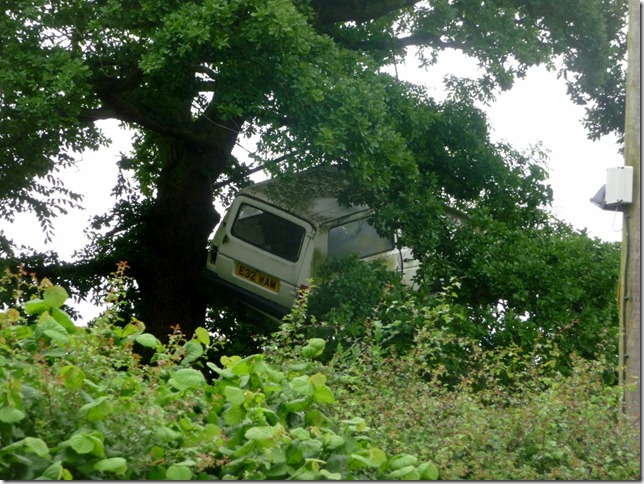 From which you can see the number plate of the car.  A quick visit to one of the many car spares suppliers sites on the web, type in the number, and you get a 1987 Reliant Rialto 0.8.  Easy enough, but probably rather more than you might be expected to bother with, so fair enough if you just got Reliant.

Question 8. The statue was indeed Hamlet and poor Yorick.  At Stratford of course. So well done on that one.

Lastly Question 9 showed a picture of us crossing the Edstone Aqueduct on the Stratford canal. Identified by its unusual towpath which runs level with the bottom of the trough.

I ran down the bank to get this photo from below of us crossing. 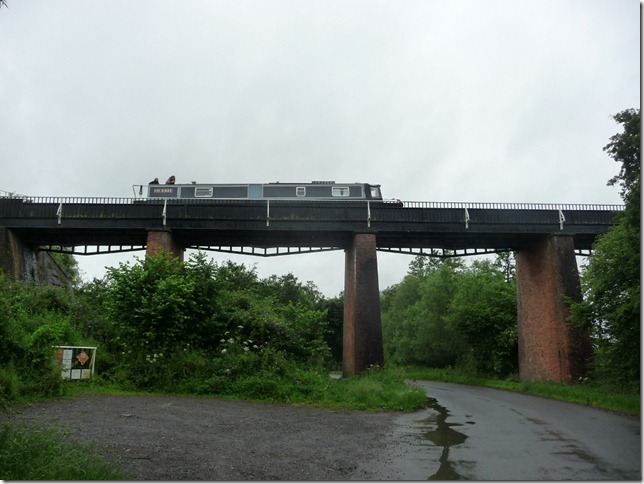 And so, tea break over and let’s resume the Herbie Awards with a traditional and much agonised over category.  The Best Pint we drank this year.  Oooh there have been so many, and as usual I have forgotten quite a few.  A good pint should not only be a good brew in itself, but also needs to be served and kept well.  “What’s all this fuss about a pint of beer?” you may ask.  “It’s not as if it’s fine wine. “ Well that’s true. It’s much better.

Three of these come to mind this year.

1. Langton Brewery Inclined Plane served at the Bridge 61 pub at Foxton locks. (where else with a name like that!)

The brewery, based near Market Harborough describes this beer thus: Inclined Plane at 4.2% is a straw coloured bitter with a citrus nose and long hoppy finish, lovely to drink in the summer. First brewed for the Leicester beer festival it proved to be so popular it is now a regular brew.  All I can add is that it is right up my street.  Gorgeous.

2. Purity Brewing Co Mad Goose served at a number of canal pubs in Warwickshire and Birmingham including if memory serves me right, the Best Pub nominated Prince of Wales in Brum.

Aah, cascade hops again.  They really do it for me.  I suppose it’s ideally a summer beer but I would be happy to quaff one now if I had one to hand. Purity’s UBU ale was last years Herbie Award winner.  Haven’t they done well?

Well nobody said it had to be Beer. Fear not.  This will not rip the skin off the roof of your mouth.  Nor is it a clear fizzy alcopop.  The colour of orange squash and tasting wonderfully of apples this is a beaut.

Black rat is apparently made on the quiet by well know cider makers Thatchers for the Moles Brewery who describe it as:

*actually as ciders go it is not especially strong.

The Bluebell is the only place we have seen this cider, but it’s worth scaling the heights of the Lapworth flight to get a taste.  We had to wade through a flooded muddy towpath to get to it.

I have probably forgotten one or two others, but believe you me this is a worthy shortlist.  Classy stuff.