An anonymous contributor called Rick rang me up to complain we’d gone all gastro with our best meal nominees and we’re losing our street cred as boaters.  He’s probably right, I’ve been watching too much Masterchef.  Nevertheless our nominees are who they are, and their food was every bit as good as a meat pie and chips.   Mmmm meat pie and chips. I’m salivating.

The Boot at Lapworth

Never mind the Porsches and the Audis ( and according to Crusty the helicopters!!!), the staff are friendly, the beer is good and the meal we had was brill – well pork actually. And we got second helpings of bread and roast new spuds.  I’ll go there again.

Vipen at Quisine does deserve a very special mention though, but he’s not a pub and not canal side, although a few boat bloggers seem to have found their way there.

Only a few awards now remain to be dished out.  The next is for Best Canal Event.

This year we got to three. In chronological order

1. The Cavalcade at Little Venice.

As nutty as ever, – I’ve just noticed the ravens on this boat 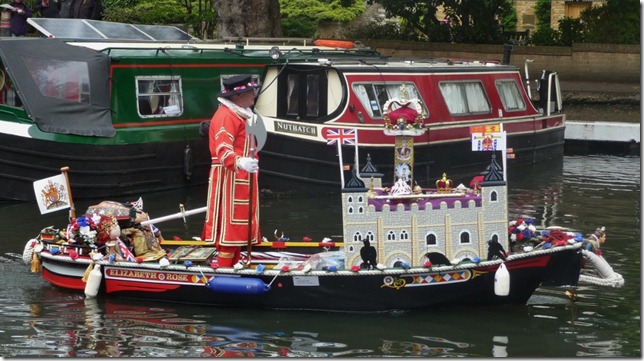 and as colourful as ever

and a chance for a drink with Simon and Carrie in their usual ringside seat on Tortoise in Brownings Pool.

Another good gathering of the clans, with rather more boating and entertainment than Little Venice.  The bloggers we met are just too numerous to mention, but it’s all very sociable,and once again we got the chance to do the slow motion Braunston Grand Prix aboard Chertsey.  Thanks Sarah and Jim.  I suppose I shouldn’t really show this pic of Sarah getting it wrong swinging into the marina, but she did do a lovely three point turn up at the junction. 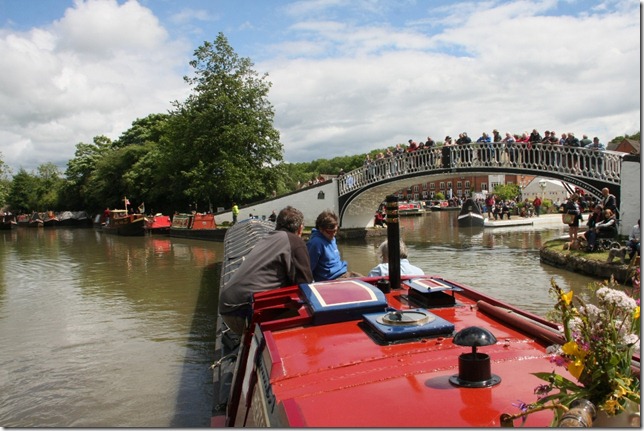 You can once again play spot the duck in this photo.

Braunston really is a fun event and there are masses of lovely boats to see and they have Day Star Theatre on the Thursday night who are always good.  I wonder if Herbie will ever be historic?  According to canal world forums her BMC engine is in the Vintage category so we must be half way there!

We only attended this because I had to catch a train to Pershore that day and we needed to be moored in Banbury!  We didn’t know what to expect, but it was quite a surprise.  Not as many boats attended as for the other two above, but it was still full up.  The onshore events though easily eclipsed the other two because of the huge food and craft market, the live music and  nutters like this strolling about:- 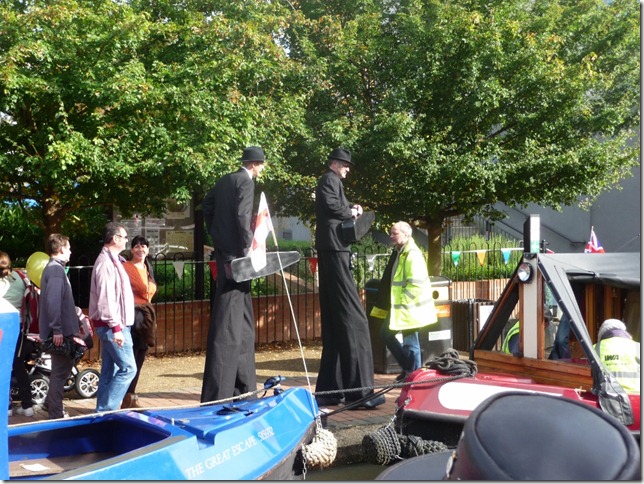 What’s more, the locals turned out in their thousands and were reminded they had a nice canal and friendly boaters.  That does no harm. 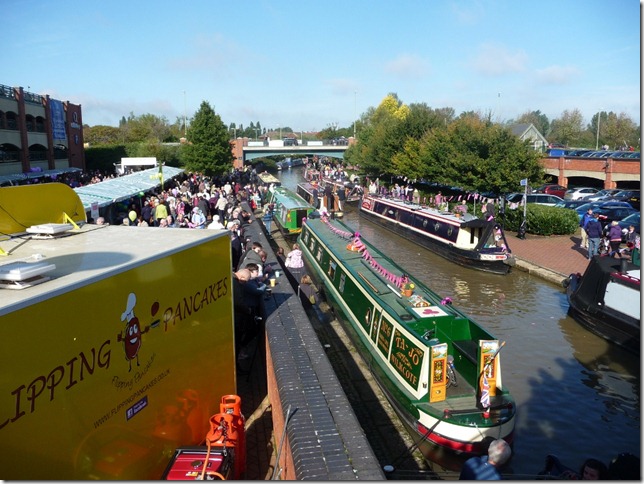 I think though that the thing we enjoyed most was being moored in the centre and having other blogging friends round for tea.  I’d certainly like to go back next year.

Three rather different events – a bit like comparing apples and pears, but someone deserves to win. Find out who tomorrow.

Three events in 2012 and the sun was shining at every one!

Neil, Do you do other awards, for example Best Narrowboat pairing, some good contenders:- Yarwood and MR, Rock n Roll and Seyella, Rock and Roll and Moore 2 life, the Aussies at Aston Marina, the hufflers (OK so there is 3)
or Epic journeys, some contenders, those who braved the Thames this year, Seyella again, Ephithany.
Just a thought.
Andy
NB Centurion

What wonderful colour and vibrancy in these photos. We tend to forget how it can be when the winter sets in.