Four consecutive days of hot sun while we were out on Herbie. Nearly a record and marred only by a brief thunderstorm on the first night as we moored up under the (uniquely?) numbered Bridge zero on the Slough arm. We were accompanied by a gathering of serious carp anglers with their barrowloads of bait and gear and camping in their bivvies. Next morning they were still cheerful in spite of not having had a bite.
Waving them goodbye we cruised on up to a favourite spot above Denham lock for the rest of the weekend. 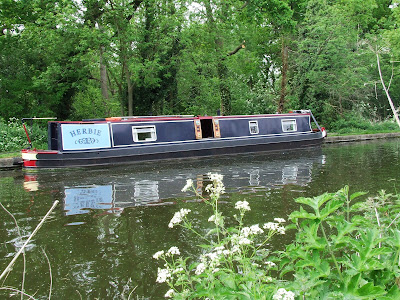 Many many years ago we used to take the kids camping in a field at Denham and this weekend we walked into the woods adjacent to the canal and were delighted to rediscover the old footbridge over the river Colne we used to walk across. It was no less overgrown then and something of a secret spot. 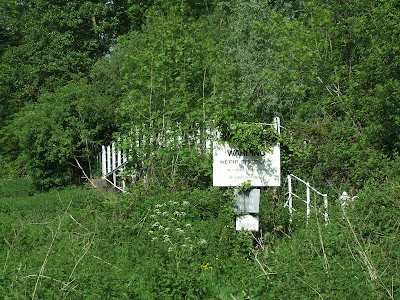 Then as now you have to brave a lot of stinging nettles to reach it. The Colne lies close to the canal all along this stretch and is a lovely river, clear, swift and shallow and bursting with wildlife. Here it is just by the afore-mentioned bridge. 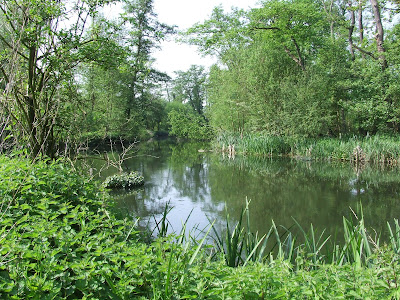 Over the weekend I steadily worked on painting the diamonds on the cratch front. It takes ages because of all the masking off between the four colours. I took the last bit of tape off as we approached home this morning. Apart from a few small areas where the paint bled under the tape (nothing that can't be touched out) it now looks pretty good I reckon. Here we are nestled up against Lady Elgar back at base. 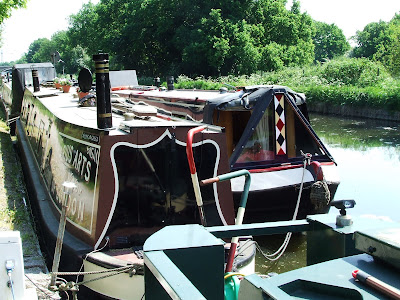 Kath did a bit of painting too, touching up a few scuffs on the gunwales, easy to do now they are matt black. This time last year Herbie was beginning to look a bit scruffy externally, but thanks to a lot of steady work she is now in danger of looking quite dapper!
Posted by Neil Corbett at 8:42 pm